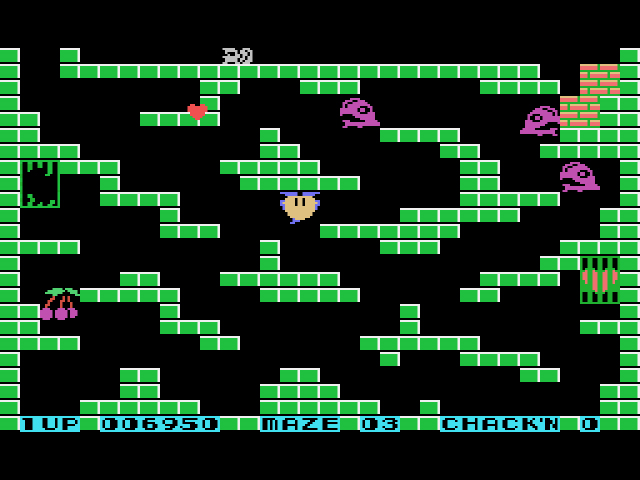 Chack’n Pop has you playing as a weird yellow creature named Chack’n. Chack’n has stretchy legs and a zeal for his girlfriend, Miss Chack’n. Miss Chack’n wants Chack’n to get his act together and “put a ring on it,” but before he can make her an honorable bird creature thing, he must travel across a variety of stages filled with danger, explosions, and caged hearts.

The basics of the game are presented in a handy tutorial stage. Chack’n is able to walk on the ground and upside down on the ceiling, but not vertically on the wall. Eggs dangle from the ceiling that, once hatched, turn into purple pupil-less Monstas (the game’s name for the creature, not mine). Chack’n throws grenades to take out Monstas, destroy walls, and release hearts from their prisons (a true warrior of love, he is). Chack’n’s own grenades are also able to kill him, though; if even a single pixel of the grenade smoke touches him, he dies. Once the heart is freed, it soars to the upper-right hand side of the stage and decimates the brick blocking the exit. Get to the exit and Chack’n Pop begins in earnest.

Every 80s song is correct: caged hearts must be freed.

The best strategy for each level is to run to the hearts as fast as you can and blow up unhatched Monstas along the way. Destroy the cages and follow the hearts to the exit, post haste. Once the Monstas hatch, they are very aggressive and will cut you off at any opportunity. Be mindful of the Mighta knight pushing a boulder towards the exit, as well. If the knight makes it to the exit with his boulder before Chack’n does, you’ll have to restart the stage. Chack’n Pop gives you bonus points and an extra life if you can get through the level without destroying any eggs or monsters, but this becomes impossible beyond the first level.

According to Wikipedia, Chack’n Pop is considered the “ancestor” to Bubble Bobble because of the latter game’s use of Monstas and Mightas, and because of a duplication of a Chack’n Pop level found within Bubble Bobble. “Ancestor” perhaps, but don’t be fooled: the two games are considerably different. Both games are arcade-y, yes, but Chack’n Pop is far slower, and somewhat more methodical in its construction, while Bubble Bobble is a brainless free-for-all that’s really only enjoyable with two players.

Chack’n must have drank some bitter beer prior to his death.

As far as I know, Chack’n Pop never saw a release outside Japan until the 2007 compilations Taito Legends 2 and Taito Legends Powered-Up emerged for the PS2/Xbox and PSP, respectively. As such, most gamers have never heard of it. If you’re a fan of Taito in the slightest, though, you owe it to yourself to try out Chack’n Pop. The name might sound like a mixture of Rice Krispies and bubble gum, but the game itself is bizarre Japanese majesty. 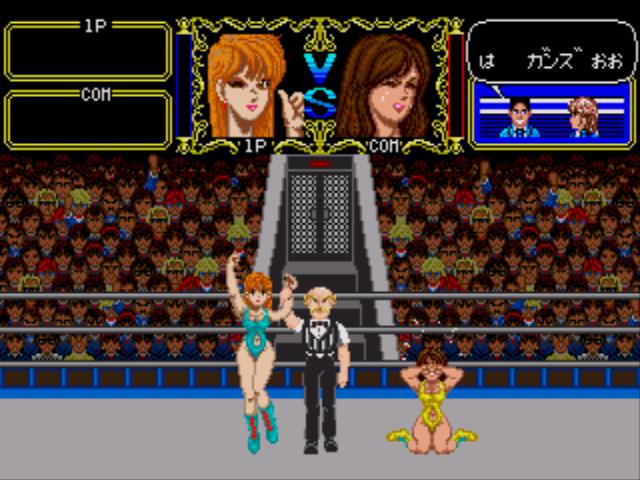