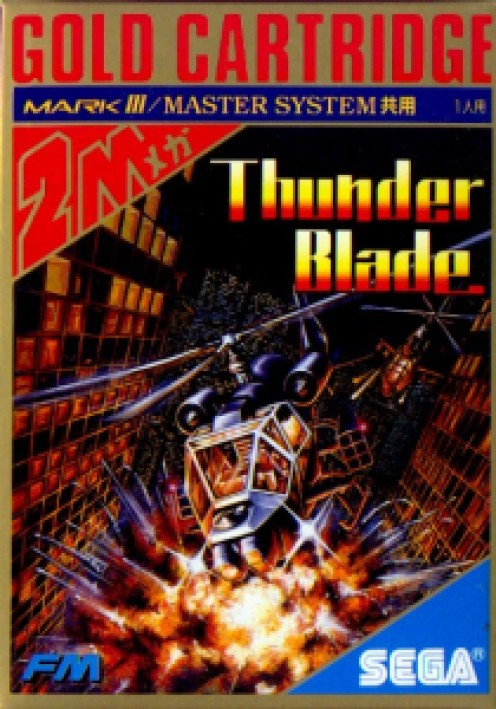 Destroying Silent Hill once and for all. 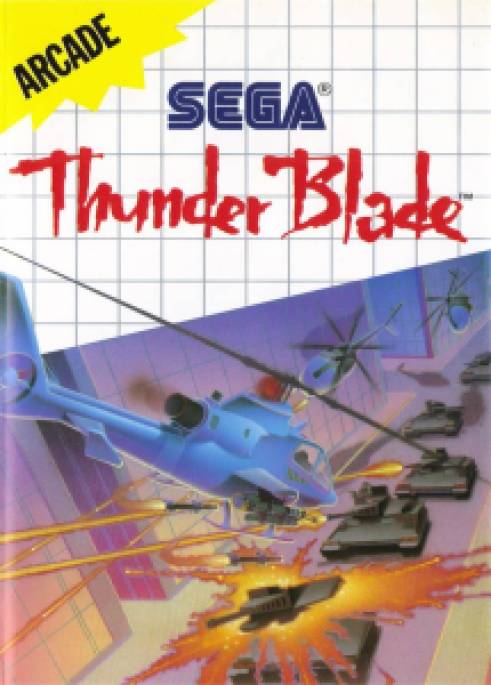 When helicopters ruled the earth.

YUP: This is another arcade port.

Dare I call Thunder Blade a borderline realistic shoot-em-up? Your helicopter only takes one hit before it’s shot down. It has two modes of attack, air bullets and ground-based bombs. There are no power-ups. Every level takes place around drab landscapes that look like they have boring real life equivalents. The only unrealistic point about Thunder Blade is that you’re a one-man army destroying what must be a small country’s army of planes, tanks, and landscapes. Maybe in the 80s we would dare to dream of such heroics, but not in today’s selfish times. 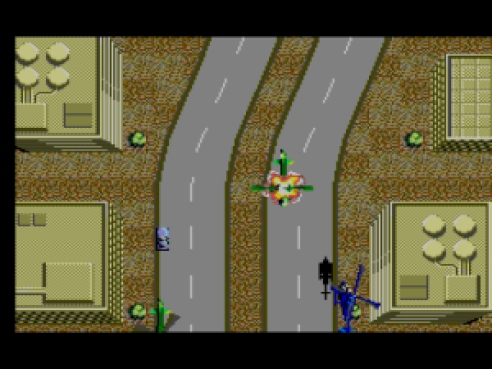 Because of Thunder Blade‘s lack – no power-ups, bland environments, choppy framerate, four levels – the game only feels like half a shoot-em-up, despite each level having three parts to it. The first and best part of each level is a top-down shooter where you attack green helicopters and green tanks amidst a sea of brown dirt, brown dust, and/or brown sand (seriously, green and brown are Thunder Blade‘s two favorite colors). The framerate is stable here and there’s a steady flow of enemies to shoot down. But – and it could just be me – the screen feels too cramped with your sizable helicopter mincing with both the tanks on the ground and the enemy helicopters in the air. The red bullets can be hard to discern as well, depending on the stage you’re in. These parts are over way too fast, but they at least make you feel like you’re playing an average shmup. 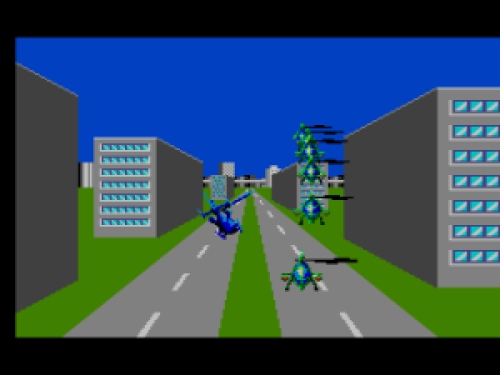 This city’s been going downhill since the helicopters moved in.

The second part of each level is a behind-the-helicopter perspective, similar to After Burner or Space Harrier sans the spastic perspective of the former and the strange environs/enemies of the latter. This does not mean that this portion is preferable to either of the aforementioned games. Sega apparently believes that the behind-the-vehicle perspective for shoot-em-ups is fantastic, despite the fact that said viewpoint makes any Master System shmup slow, unstable, and impossible to tell if the bullets will hit your helicopter/airplane/levitating Rocketeer. These sections also chug on for far longer than needs be. They’re at least three times as long as the top-down shooter portions, and while that still isn’t very long (each level, if completed without losing lives, could be taken down in about seven minutes), it will feel like an eternity, thanks to the all-encompassing crapulence. 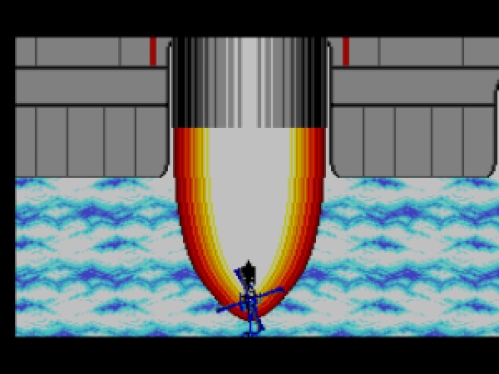 Gettin’ sweaty in the cockpit.

The last part of each level is the boss fight. The bosses again adhere to the game’s staunch pseudo-realism, and include a large missile, a fortress, an aircraft carrier! Stuff you’ve seen before. You destroy the shootable parts to take ’em down. Or don’t. If you make it to the end of the boss without dying, the boss will still explode, even if you didn’t shoot it at all. Yay realism! 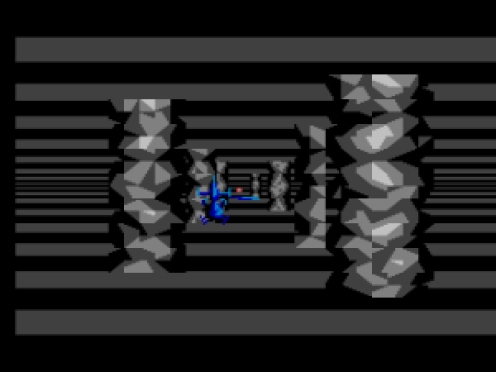 It takes a lot for me to dislike a shmup, it takes a train for me to hate one. Thunder Blade is a long ride aboard the Union Pacific. The game’s lack of enthusiasm for itself is stunning. In my time spent with the Master System, I’ve seen few titles look as bad, sound as bad (the music and sound effects combined sound like stunted farts atop shredded wax paper), and provide so little reason for continuing. A helicopter shoot-em-up could work, but by gar, Thunder Blade is not the way to chop about it.

A panorama of destruction.

Thank goodness the war is taking place outside city limits. 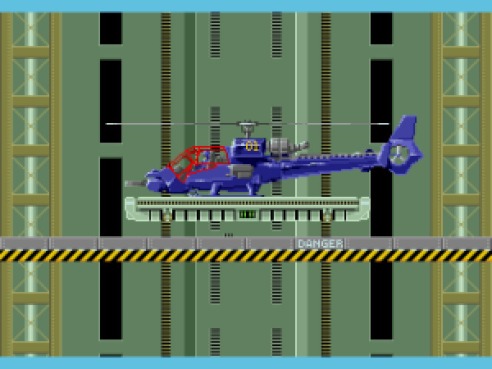 The gameplay has changed slightly, if only because of the Mega Drive’s additional power. In Thunder Blade, you were wrestling with the choppy framerate while trying not to get hit by stray fire. In Super Thunder Blade, the framerate is much smoother, but as a result, Sega adds more enemies and more firepower. Hot dang, there’s so many enemies – and they shoot so much. Fighter jets, rival helicopters, tanks: everybody’s got beef. You’ll be swinging back and forth throughout the levels, avoiding the tall skyscrapers and the neverending infernal onslaught. The constant sway-and-shoot hypnotizes you into a moderately enjoyable trance. In fact, there’s the tagline. Super Thunder Blade: a moderately enjoyable trance. 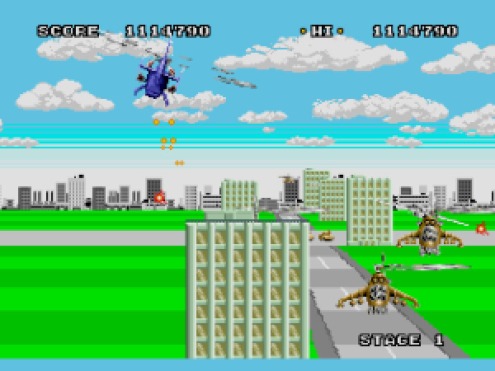 The action is so fast, you’ll hardly have time to notice who’s shooting at you.

There are still only four levels, which means each of them is a hard-as-cojones endurance run. The second level, where you dip in and out of caverns, goes on forever. The caverns have pillars, stalactites, and stalagmites, and it is here where you notice how slow-moving and huge your helicopter really is. You’re asked to make split-second turns in and around the caverns’ pillars while being shot at by tons of enemies. In order to do this with perfect style and grace, your helicopter would need to be smaller, more agile, and speedier, but as Hardcore Gaming 101 points out, Thunder Blade controls as slowly as a helicopter would in real life. You can slow down on a dime with the ‘B’ button, but it’s difficult to keep a steady pace. All you can do is pray that your able-bodied maneuvering will get you through the many danger zones. No skill, only luck.

Nothing but blood, metal, and a goofy tank sprite.

Super Thunder Blade gives and takes. The overhead flying sequences are gone, leaving only the behind-the-shoulder perspective and the overhead boss portions. No big loss, though, since the behind-the-shoulder gameplay has been greatly improved. The original Level 3 has been excised in favor of a new level, a battleship brawl across the ocean. Also, each level adds a mid-boss, a much-needed feature that breaks up the considerable length of the levels. 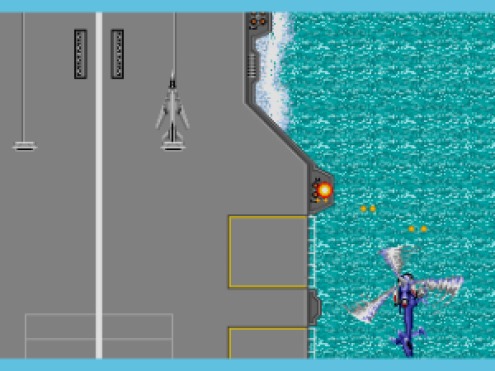 At least I can still shoot down giant aircraft carriers. Partial credit, Sega.

Super Thunder Blade suffers from some of the same problems as the original: the boring traditional scenery, the absence of power-ups, and the incredible difficulty. These issues didn’t bother me as much here, though, if only because the rest of the game sits on a solid foundation of mild respectability. Super Thunder Blade has sharper visuals, faster gameplay, and an intriguing progressive rock soundtrack, but more importantly, the game plays like Sega gave a damn. If I’m honest, that’s all I ever want.