Johnny Quest grows up and moves to Space.

That woman dragon creature is filled with longing.

The original Space Harrier for the arcade was a technological achievement of the highest order, a super-scaler tour-de-force, with a cabinet that thrust you completely into the game’s disturbing wastelands. The Master System version, however, was severely compromised, despite including all of the levels from the arcade. Slow framerates and excruciating difficulty were just two of the port’s issues. Sega decided they would make matters worse with Space Harrier 3-D, also for the Master System. The 3-D effects were revolting and the five frames-per-second action redefined the word “slowdown.” It was clear that the Space Harrier series and the Master System were like coffee and Mexican food, an obviously deadly combination, made all-too-clear after the fact.

Enter the Mega Drive and the launch title, Space Harrier II. This sequel doesn’t expand beyond the original’s formula. The game is still a pseudo three-dimensional rail shooter. You still play as the Harrier. You still have a tight bodysuit (this time, it’s bright red!). You still fly through the sky/run on the ground, shooting decapitated heads, robots, and gigantic frogs. And yet, thanks to the Mega Drive’s eight additional bits of power, the scrolling almost matches that of the original arcade. The graphics are just sharp enough to convince you that, yes, the arcade looked about this good. The framerate isn’t perfect, but Space Harrier II moves along far smoother than the Master System ports.

“Your grape lifesavers mean nothin’ to me, ya hear?! Nothing!!!”

Despite Space Harrier II looking, playing, and sounding more or less like the original, there are a couple interesting new features here. You select from any of the game’s twelve stages at the beginning of the game and play through them from that order. All of the stages have balanced difficulty. Even if you start with stage seven or eight, the game provides more or less the same amount of challenge the entire way. Play through the twelve selectable stages and the final thirteenth stage unlocks. There, you fight the Dark Harrier, an evil alter-ego who doesn’t believe in your red bodysuit wearing ways.

Of course, there are no continues, just a handful of lives. But there is an Option Menu, accessed only by holding ‘A’ at the main screen. Here you can change the difficulty, turn on Rapid-Fire, play a Sound Test (I advise against this – the muzak makes it sound like you’re walking through a Sears, not devil-may-care shooting everything in sight), or choose inverted controls. Option Menus would become common fixtures in the 16-bit era, but Space Harrier II is such an early release, I’m surprised to see one here – even if it is ‘hidden.’ 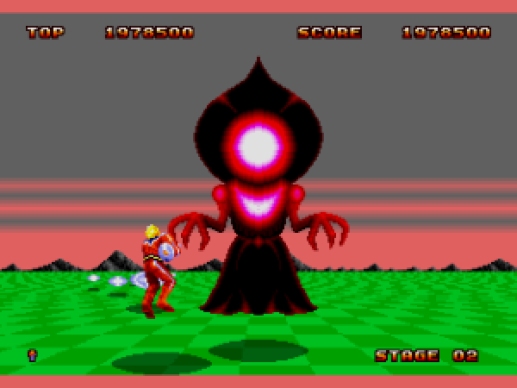 Perhaps Space Harrier II works so well on the Mega Drive because the game was designed from the ground up for the console. There was never an arcade version, just the Mega Drive release and a handful of computer ports for the Commodore 64, ZX Spectrum, etc. It would have been nice if Sega had spiced up the Space Harrier formula a bit – perhaps with additional weapons, longer levels, game-changing power-ups. Overall, though, I was content with playing a reasonably decent version of the series on a home console. Space Harrier II may not innovate, but it’s polished and that’s enough.