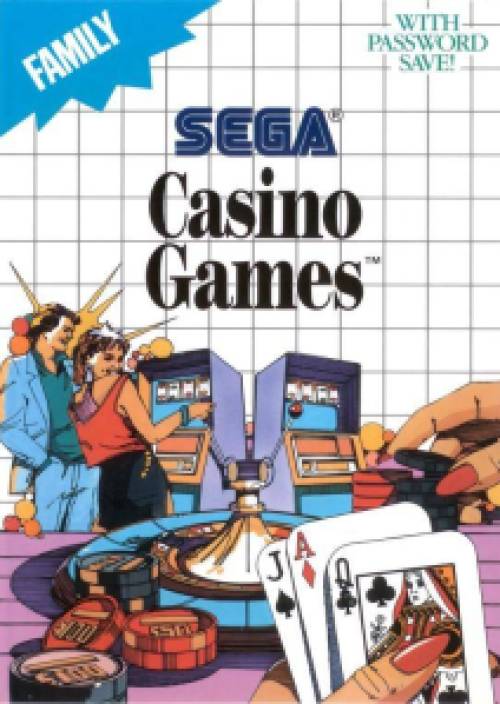 You have but one purpose in Casino Games: to become the highest roller Everytown Casino has ever seen or lose your money trying. Pretty girls wink and guide you to your gambling destinations. Poker, Blackjack, Baccarat, Slot Machines, and Pinball demand satisfaction in the form of chips and tokens. The opponents are ruthless, the dealers cold and calculating, the booze watered-down and plentiful. Yes, everyday is a Vegas holiday when you’re draped in Casino Games‘s seedy splendor.

Janet and I make a great no-pair.

Casino Games‘s highlights are Poker and Blackjack. The games are standard, but if you enjoy them in the gambling fields of the real world, their virtual counterparts will hold your attention longer than you’ll care to admit. Poker in particular gives you four opponents to play against, each with their own personality and temperament. While I didn’t notice any difference in Janet’s play style as opposed to Charley’s or Nancy’s, it’s nice to have the option. Blackjack is my personal favorite of the three, so I spent a lot of time there, hoping for that coveted 21. I happened upon the fabled number twice, but after a time (a long time, admittedly), the dealer’s continuous winning wore down my spirit. One can only take so many double downs.

Baccarat is a game you observe rather than play. You and your opponent are dealt two cards, in hopes that they’ll add up to 8 or 9. Jacks, Queens, Kings, and Aces are zero, so if you have a Jack and a 6, you only have a 6. If both you and your opponent get an 8 or 9, you get your money back. That’s the abbreviated explanation, but just know that, outside of setting down an amount of money, there’s little to do here. The sessions are often over so quickly that, whether you win or lose, there’s little enjoyment in the process. 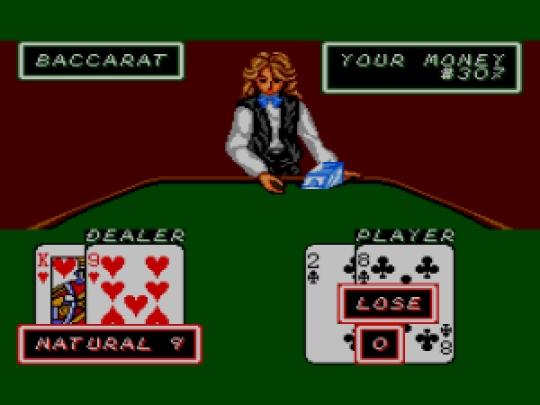 Alright, dealer, I’ve had enough of your “natural” skill.

The slot machines are devourers of money. They require no skill and little to no thought compared to the card games. Stick your token in, pull the slot, and hope the purdy pictures line up so you can make your money back. While you do have the option to play a $1 slot machine up to a $50 slot machine, the amount of money you lose will always be greater than the amount you win. Not worth the risk, unless you’re completely bored with cards and have ample amounts of money to toss to the wind.

Almost as thrilling as virtual pachinko.

The pinball machine is intended to be a welcome reprieve from the stress of winning/losing money. You play for points, not earnings, so nothing is gained or lost. The machine has three angles to choose from: Gentle, Middle, and Steep, with Steep sending the ball towards the bottom faster. Unfortunately, the machine’s two-tiered, Casino Games-branded design lacks imagination. There’s little in the way of flair or bonuses that typically entice one to play for more than a round. Still, a nice idea, even if the execution is wanting. 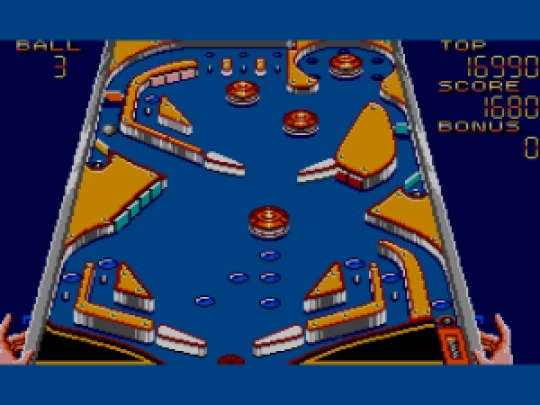 Ladies and gentleman, the Most Boring Pinball Machine in the World.

When first welcomed into the casino, you’re asked if you have an account. Should you wish to quit, the game will provide you a password so that you can return to your winnings at a later period. This is a great feature, particularly if you’re on a winning streak and you’re up several thousand dollars. Better to walk away on a high note and be thought a fool, then to lose your money gambling and remove all doubt.

You know I do, baby.

After spending inordinate amounts of time and a lot of fake money in Casino Games, it’s clear that the whole is greater than the sum of its parts. Poker and Blackjack completely carry Baccarat, the Slot Machines, and Pinball; none of the latter three are poorly made, just lacking in depth. Taken as a complete package, however, Casino Games does an admirable job of recreating the atmosphere found within a gambling hovel. And, if I’m honest, I’d much rather stay at home and pretend to lose money than drink myself stupid and wind up broke next to a bunch of uncaring strangers.