Dinosaurs riding tanks… what a time to be alive.

In Time Soldiers, you travel through different periods in history in order to save your war buddies from being eternally melted by a giant robot warlord from the future (sounds like a Iron Maiden concept album, eh?). Transporting between ages and places in history makes you feel invested in recovering the five captured POWs, but the top-down, run-and-gun gameplay is marred by bipolar difficulty and generic action. 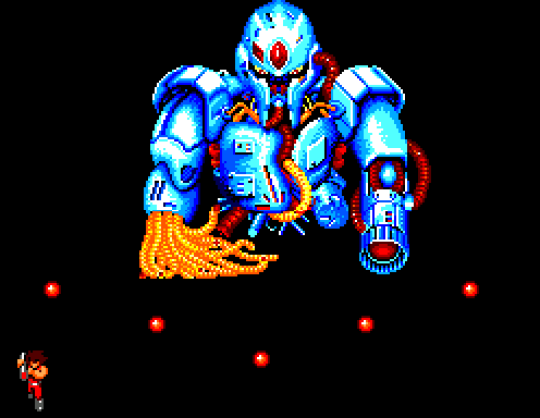 C’mon Gylend, you’re better than this.

Before you even start a level, Time Soldiers will inform you where your buddy is located. Even if the text states that your buddy is in Ancient Rome, the game will start you in World Wars or Prehistoric Age – anywhere other than Ancient Rome. To get to the latter, you shoot/walk your way through a short piece of a level, defeat the mid-boss that appears after about 30-60 seconds of play, and go through a time tunnel that will transport you to the next time period. You have no say as to where the time tunnel will take you, so while you’d like to go straight to Ancient Rome from the World Wars, the tunnel might spit you out in the Prehistoric Age for kicks. Usually after a couple different levels in the wrong era, you’ll be taken to the correct era. Once here, continue forward until you run into the main boss. Defeat it, and you’ll get your buddy back. This roundabout progression continues until you’ve acquired all five lost warriors.

You’d think Anubis would hang out in Egypt, but here he is in Ancient Rome.

The back-and-forth level hopping mostly serves to make Time Soldiers seem more in-depth than it actually is. Even so, the game’s non-linear framework is the only aspect that keeps you moving forward. You want to see where the next time tunnel will take you, even though you won’t care what happens when you get there.

Why is that dinosaur eating a fruit leather?

In most run-and-gun shooters – Ikari Warriors, Guerilla War, heck, even the arcade Time Soldiers – you’re forced to take out as many enemies as you can, as quickly as you can. Not so here. Enemy placement is not only sporadic, but many of them don’t care whether the protagonist is there or not. As such, it’s completely possible (and recommended) to walk through the levels quickly without hitting more than a couple enemies.

This doesn’t mean the levels are easy. Depending on the era you’re in, enemies can shoot up to four projectiles towards you at one time; yet another reason why it’s often wiser to walk past them. Yeah, you might miss the occasional power-up they drop, but you’ll have your health. Unfortunately, this makes for some boring levels where all you do is maneuver around rocks and buildings and shoot the occasional enemy. Admittedly, the further you progress into the game, the more you’ll have to actively participate in the war going on around you. But aside from the swarms of projectiles, you’ll rarely feel overwhelmed by your surroundings. 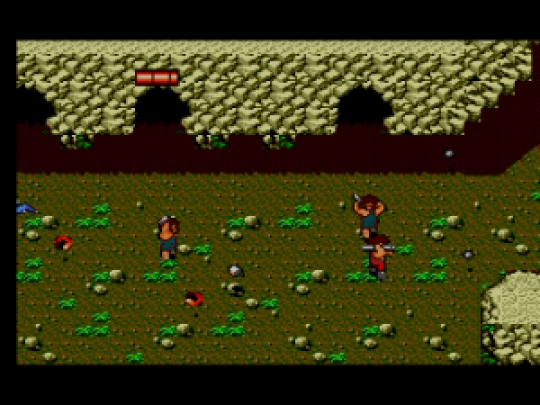 Time Soldiers is also a game where the mid-bosses can be harder than the main bosses. Main bosses are often slow, have a weapon or attack that can be easily avoided, and can be eliminated without much trouble. Mid-bosses zip around the screen, spew tons of projectiles, and will involve the loss of a life or two. In fact, unless you use a secondary weapon (missiles, energy guns, and tri-shot guns are all fantastic and necessary against mid-bosses), you will lose more lives on the mid-bosses than you will on the bosses or in the levels.

Time-traveling is a lot like dropping acid. Both result in seeing whatever this is.

When I played the Time Soldiers arcade after the Master System version, I saw what the game was intended to be: a beautiful, chaotic onslaught of aggression that required more strategy in a minute of play than the Master System port as a whole. The enemies don’t just haphazardly meander through the level. They care that you’re in their territory and will do everything in their power to stop you. Also, the levels are gorgeous and feel like authentic worlds that you’re walking through. While I can’t fault the Master System port for having lesser graphics than the arcade, Alpha Denshi could have taken more care and interest in the port’s level design.

Even with the port’s numerous flaws, I kept playing like a man possessed. I wanted to get further in the game to see the different time periods, even though I knew they would disappoint. They always disappointed and I never stopped playing. Time Soldiers for the Master System might not be a great example of the top-down run-and-gun shooter, but it does show that a unique concept can elevate otherwise generic action.

As I mentioned before, this was my last SMS purchase. But I sure did love the arcade game. This like you said is not that. I thought this one was impossibly hard. And while it has nice graphics, it just doesn’t play the same. Yet I’m still glad to have been able to play a home version. They could have made a kick ass version of this on Genesis. Also two players was fun. I think Alien Syndrome did it better. But time travel and cool bosses make this game seem better than it is.

Yeah, this would have been better suited to the Genesis.

It seems like a lot of games from this era did the time travel thing. I guess it was an easy way to make your game seem interesting? Each game usually followed the same set of level types though. Prehistoric (gotta get yer dinosaurs in there), ancient Egypt, old west (probably had a train part in there somewhere), and maybe something with pirates. Double points if it either has a final level in the present day or set in the future!

I really like that the only way you get a continue is to mash buttons, which is stated nowhere. I believe each spot that will have a mini boss and portal is locked to take you to a specific period, and you can walk past that portal and go to the next mini boss and portal which may be locked to take you to the period you’re trying to get to. I know whenever you start the game in the world wars if you kill all enemies on screen then further forward three soldiers walk left to right, if you kill all three, left to right, a red and green square will drop that will take you to the fruit leather trex. I’m not sure of others in the game, but I really like that kind of hidden, straight to a boss portal. I especially find it neat because of its potential close proximity to the start of the game. But yes, all gimmicks. Enjoyed reading the review.

I know the red and green square you mentioned, but it was the only direct-to-boss warp item I could find.

Hi- Just leaving a comment on your newest post. I just discovered your podcast this past week. As the rare American that had an SMS and not an NES, I always seek out all things SMS on the internet. I own the complete US collection of SMS games now (Buster Douglas- complete). But growing up, we had around 15 games or so: Hang-On/Astro Warrior, Black Belt, Kenseiden, Enduro Racer, Pro Wrestling, Great Baseball, Walter Payton Football, Slap Shot, Michael Jackson Moonwalker, Altered Beast, F-16 Fighting Falcon, and Rocky.

Just listened to your episode where you trash Black Belt, and I do have to say nostalgia definitely plays a role in my love for this one. Anyway, keep up the great work.

Holy crap, the complete US collection? If you’re willing, I’d love to see a picture of that.

Thanks for the compliment! Glad you’re enjoying the podcast.

Alas, I can not see the pic. Oh well, no worries!

Oh sorry, I don’t want the pic to go to waste. Try this: http://imgur.com/VYARUNl

Wow, that is awesome! Thanks for sharing!

Nice! You even have the super rare American version of Sonic the Hedgehog, Some people deny this exists. Say it was a Canadian release only. But works for me.

Thanks for the shout-out on the new podcast episode. I realized after posting that California Games was also missing in the picture. It was sitting in one of my 3 master systems at the time. My 4-year old nephew loves Gangster Town and After Burner, so they were at a family home at the time. The games on the floor were ones that weren’t USA Releases.

I understand that, objectively speaking, this is a very average top-down run & gun. However, it’s one of the SMS titles I’ve really enjoyed playing, and one that I hope to find complete in box at some point. But then, I really like Heavy Barrel and the Ikari Warriors games, so that’s just me.