About six years ago, I was really sick. “Sick unto death,” as the Scriptures say. I had lost tons of weight, was having chronic acid reflux in my chest (like being burned alive from the inside), and the doctors couldn’t figure out what was wrong with me. I was in and out of the ER about nine times in a six month span, which is crazy (thank God we had poor person’s insurance at the time). During this time, I was also working full time because my wife was going to school full-time and bills, unfortunately, don’t stop coming just because you’re ill.

It was during this period – early 2010 – that I found Retronauts. I can’t remember which episode I started with, but it didn’t take me long to download the backlog and work my way through. The entertaining and enlightening conversations between Jeremy Parish, Bob Mackey, Ray Barnholt, Scott Sharkey, among others really lifted my spirits during this dark period. When I listened to Retronauts, I didn’t dwell on the mystery of my illness or consider the pain coursing through my body. My mind was able to decompress, if only for a couple hours at a time.

My story is not the only one of its kind. This retro gaming podcast helps thousands of people: truck drivers who spend hundreds of hours on the road each week; office workers bored by the drudgery of another day; sick folks, like me, stuck in a hospital bed or at home, depressed and frustrated. They tune in for the retro gaming banter, sure, but also because the podcast and the people on it make their day a little easier, a little better. 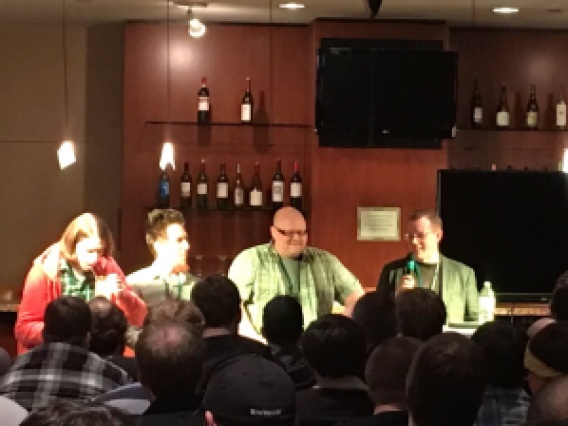 Not the clearest picture, but we work with what we have.

To actually be a guest on Retronauts, then – for a live panel about the Master System, no less – was a surreal experience that probably won’t be topped for some time. Recording the panel and the supplemental material was a thrill, but I enjoyed the meet-and-greet afterwards the most. All of the people were warm and friendly, but beyond that, it was great to get a glimpse into the lives the podcast has touched. Thanks to the grace of God and the generosity of Jeremy and Bob, I was able to be a part of something much larger than myself. For that, I’m grateful. 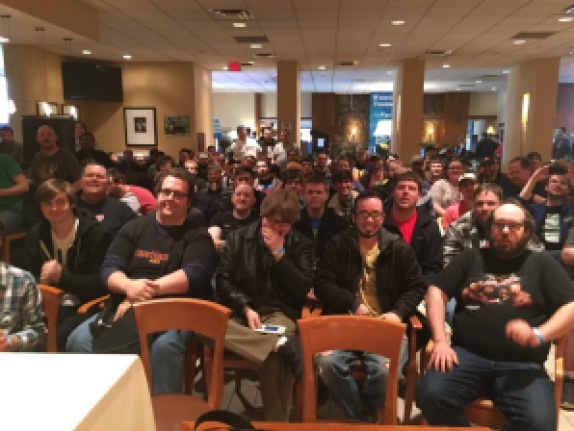 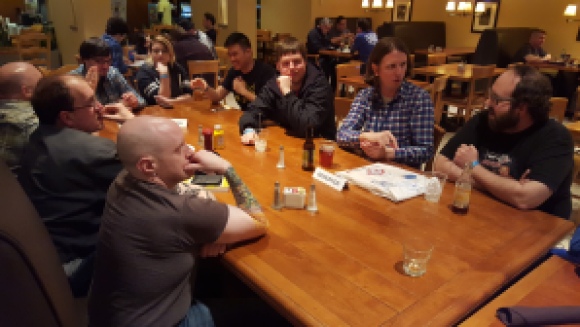 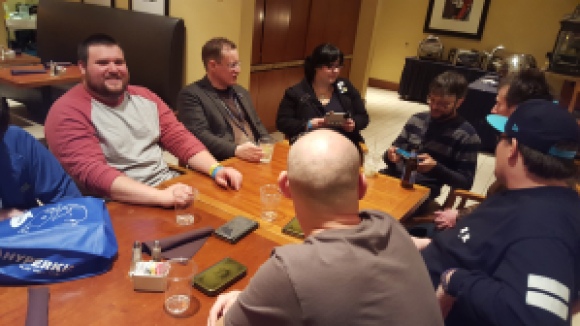 The Retronauts meetup. We had a huge table.

0 replies on “Being a Part of Retronauts”

Been following you since Questicle; so glad to see all your efforts rewarded like this. Awesome.

Curious: did you ever figure out what was going on with your reflux? I have similar issues and am struggling to control it.

As far as reflux goes, mine was a result of my gallbladder not working. Basically, bile from my gallbladder was getting pushed back up into my esophagus and chest… something like that. I’m unsure how it all worked. All I know is they took out my gallbladder, and after a several month recovery, I only get acid reflux on occasion and it’s usually only when I eat crap.

Chronic reflux is usually a side issue of a larger problem, no matter what Western medicine says. Doctors threw pills at me for months, thinking all I had was reflux, but none of them worked. I hope you’re able to figure out what’s causing your reflux.

Yeah, stress definitely makes the problem worse. And thanks!

There’s something about Retronauts that I just find so comforting. It’s the one podcast that I’ll keep coming back to when I get tired of listening to podcasts and it keeps me interested in video games when I’m feeling like I’m done with this hobby. That’s awesome that it was able to see you through some seriously difficult times.

Really glad I was able to see the live show at MGC and that you were part of it. Wish I could have stayed for the meet-up, but hopefully the Retronauts will return with you as a guest again someday.

Retronauts has a pureness to it: when the gaming culture around us goes to pot, they’ll be there, reminiscing about better days.

Glad I was able to meet you, sir. I’m sorry you couldn’t stay and chat, but perhaps we shall meet again one day.

I’ve just Listend to the first part of the podcast, and feel very grateful that you and the other guys on the panel our willing to share such tremendous expertise with us for free! very cool!

2 non-essential thoughts on the stuf you guys discussed

– To the topic “awesome backwards compatibility sega offered to its customers” can be added (this wasn’t mentioned I believe) a Master System converter for the Game Gear! Admirable that you guys are able to link these seemingly trivial facts and place them within a larger framework (customer service, marketing to parents …). I honestly never looked at it from that angle. Clearly a broad Knoledge base breeds insight!

– On a personal level: It was nice to see some of my own gaming experiences comfirmed … Namely that the Master System for many doubled as a nextgen console. Since I wasn’t among the living before 1986, my birth as a gamer can’t possibely date back before the first half of the nineties. So I obviously missed out on the “historical” prime of the 8bit consoles, and thus only became a gamer during the 16bit era. Still for many years I, my older brother and many of our friends were solely hooked on the Master System 2 … well into the Playstation era

It was not just about holding on to an older “classic system” either. We didn’t inherit a second hand Master System from an older sibling or anything like that. No, we got a brand new console! The master System 2. Though I Can’t back this with any hard data, I’m pretty sure that the MS2 must have sold as well, maybe even better than the original MS in Belgium. The MS2 is not just an afterthought!!!

… So is this again one of those peculiar alternate reality Europe things? Or is this somewhat comparable to the american NESbase during the SNES/Genesis era ?

Thanks Pieter! Jeremy’s notes were really thorough and well-researched.

I wouldn’t be surprised that the Master System 2 sold really well in Europe, particularly as the system was getting games into the mid-90s. The NES was pretty much done by ’92 or ’93, but developers continued to put out games for it until ’94 due to the system’s popularity and massive userbase.

It was great being apart of the audience and the meet and greet! Great meeting you and will continue to follow your endeavors.

Thanks Troy, it was good to meet you!

Great combination of my two favorites. There was discussion of the snail maze game being a pack in game. I don’t consider it a pack in game because but it was never marketed or publicly made known. It was a secret ‘Easter egg’ game you only found out through your friends word of mouth back then. There was no internet so stuff like this was truly a surprise when you eventually did find out.

It’s one of those things you had to actually be in that era to really understand the excitement of finding a secret game (even if it wasn’t that good).