Jonathan Broadstone swings to the heavens.

Sanritsu put a lot of hard work into Golfamania: four different modes, RPG features, subtle mechanics that require lots of practice to master. And while the US only saw a limited release, Europe got to bask in the game’s truly maniacal attention to detail. If Arnold Palmer Tournament Golf was the brash and brilliant 16-bit showpiece, then Golfamania is the quiet, thoughtful sim that innovates without showing off.

The four modes – Practice, Match Play, Stroke Play, and Tournament – are all listed by order of golf intensity. In Practice, you’re only allowed to play one hole at a time. Match Play pits you against a friend or the computer in one 18-hole round. Stroke Play allows you to build up your character’s stats either by yourself or alongside three human/computer opponents (with humans, you pass the controller back and forth). Tournament actually encompasses three Tournaments, Western, Eastern and Sega, but your progress past the Western tournament depends on if you beat the scores of 30 (!) top golfers. 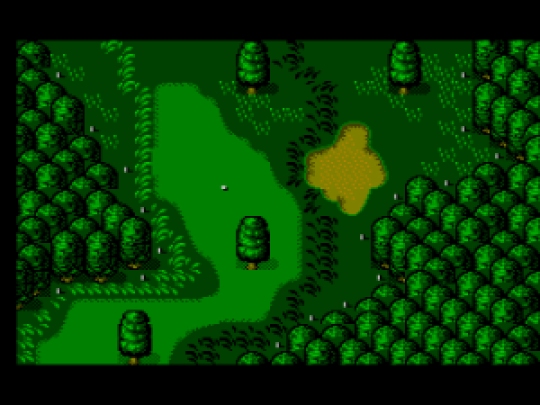 Stuff this in your Viewmaster and contemplate.

When you first get on the green, two pop-up boxes inform you of the hole’s basics: wind speed, par, yards to hole, etc. Line up your directional cursor and pick a club: wedge, iron, the usual gang. Beneath each club, the game displays the maximum number of yards each club is able to hit, a nice touch. Once the club’s in your hand, pick a spot where you want the club to hit the ball. Hit higher and the ball will roll farther upon landing. Hit on the far right of the ball – the Hook Ball area – and the ball will curve around to the left (crazy physics!). Select a spot, and you’re shown a Power Gauge. The Power Gauge has blue, green, and red Shot Zones, each with a differing amount of power. A Shot Gauge travels quickly up and down between them all. For a powerful slice of fury, stop the Shot Gauge in the middle of the Power Gauge (usually the Red Shot Zone). For a middling shot, stop the Shot Gauge anywhere else. 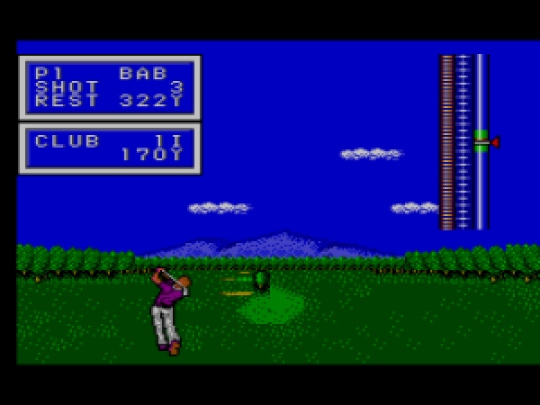 The latter paragraph may sound like typical 8-bit golf mechanics, but Golfamania is one of the more precise golf games I’ve ever played. The Power Gauge, while not impossible to learn, is finicky. Some irons and wedges have larger power ranges that provide for a wide margin of error, while the ones you’ll use the most – the 1W and the 1I – have thin slivers of top power. If you don’t stop the Shot Gauge precisely in the middle of these hits, your ball won’t get very far. Putting is similarly difficult. While your putter’s Shot Gauge is considerably wider, you have to account for the direction of grass growth and if the ground is level or not.

Me missing a presumably easy shot.

In Stroke Play and Tournament, you’re able to build up your golfer’s Power, Luck, and Accuracy stats via experience points acquired from each hole. Power increases distance of wood shots. Luck decreases the chances of you landing in a bunker, and allows your ball to sail through trees. Accuracy widens the shot zone for irons and woods, making it easier to hit a sweet sailing ball.

The requirements to get experience points are intense. If you make a par shot on any of the holes, you’ll get one point. The more under par you are, the more points you receive. Easier said than done! In tournament mode, points are acquired by hitting long drives over 220 yards on specific “longest drive” courses, with different amounts of points given depending on how far you hit the ball. Also in tournament mode, if your first shot makes it within a few yards of the hole on “near-pin” courses, you get points. After you get a certain amount of points, your skill level will rise and you can select either your Power, Accuracy or Luck to increase.

Boy, do I suck at Golfamania. Never was a Practice mode in a sports game so necessary for my survival. Even with an ample amount of practice, I was never able to get the hang of putting or long drives. It’s not the game’s fault, though. I lack both the patience to master the Power Gauge and the understanding to putt like a Zen master. Truly Golfamania is too rich of an experience for my blue-collar blood, but golf fans will find lots to love on its freshly manicured green.

How would this hold up against, say, NES Open? I won’t say Golf, as there’s something like seven years of iteration possible between these two titles.

I think they totally missed out on getting Hulk Hogan to endorse this.
“ARE YOU A GOLFAMANIAC???”