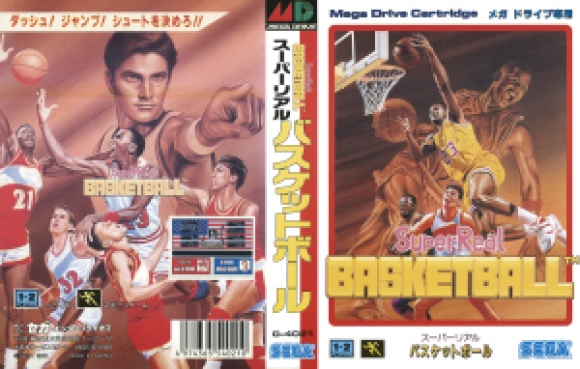 He’s not the Arnold Palmer of basketball, but he’ll do.

As opposed to ‘slightly’ real.

Coach Pat Riley – with his slicked back hair, outstanding posture, and striking jaw – is the cover boy for Sega’s first 16-bit basketball game. As with Tommy Lasorda and Arnold Palmer in their respective Sega sports games, Riley didn’t do anything for Pat Riley Basketball other than provide a stock photo for the cover and appear in pixelated form on the title screen. Thankfully, the game otherwise known as Super Real Basketball is good enough that he doesn’t have to.

Because this is early 1990, options are few and real teams are nowhere to be found. You can either play an Exhibition game or a Tournament, where you sign away your precious free time to Sega in return for all the basketballs you can handle. The team names are hilarious – New York Busters, Denver Jammers, Boston Bashers, etc. – though it doesn’t seem to matter which team you pick in terms of performance. The manual swears there are differences between the teams (“The Busters guards are great ballhandlers,” the author raves), but in my time with New York and Denver, I couldn’t discern any. 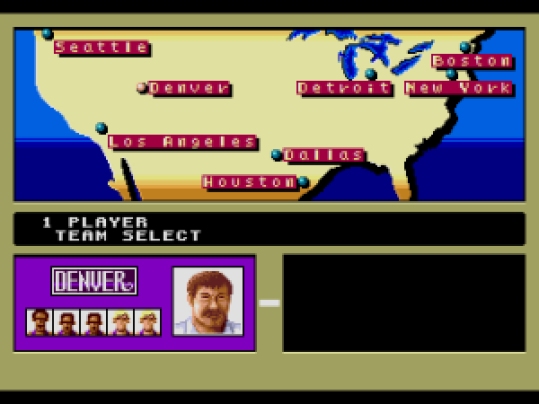 Coach Bob “the Brush” Komposky is known for his bristly demeanor.

To me, the ideal sports game is one that I can pick up and play without fumbling with the controls. Pat Riley Basketball provides this. Whether it’s passing to a teammate, stealing from an opponent, or blocking an opponent’s shot in the game’s cinematic cutaways, I never questioned what buttons performed which actions. The games are fast, but not overwhelming. Even with ten large sprites on the court, the action never gets too busy.

The Busters have it all under control.

I started on Easy Mode with the Denver Jammers and it didn’t take long to jamma-slam the Boston Bashers into the ground. Normal Mode with the New York Busters against Boston was more challenging and engaging, though I still maintained a lead for most of the game. That being said, I’m generally terrible at sports games. If you’re a virtual baller from way back, there’s a good chance Pat Riley might be too easy for you.

Besides the smooth controls and acceptable difficulty level, Pat Riley Basketball also provides some arcade flash. Make a shot next to the hoop and the game cuts away to a close-up shot of your player alongside a Shot Gauge. Get the white ball in the red portion of the Shot Gauge, and your player will make an epic dunk. These cinematic cutaways also occur during Tip-Off, certain three-point shots, and when you block the opponent from dunking.

Almost had it there…

Sega’s early Genesis sports output has been hit-or-miss thus far. Tommy Lasorda Baseball is considered a classic by many, but I wrestled with the hard-to-control batting and pitching. Arnold Palmer Tournament Golf is one of the finest, sleekest golf games I’ve ever played. Pat Riley Basketball might be a toss-up for some ballin’ aficionados. If you’re the type of basketball enthusiast who needs depth or SUPER REAL players in a video game to have fun, Pat Riley isn’t for you. It’s hard to argue with the game’s solid pick-up-and-play arcade foundation, however, which allows shlubs like me to have a good time while remaining ignorant of the sport as a whole.  Rest well on Sega’s money sacks, Coach Riley. They’ve done your name proud.

I picked this up when it came out. I spent the summer having fun with it. It’s a very arcade playing style of game with a lot of flash. It was typical early Genesis cutting away to large digitized screens of players performing dunks. It had basic controls, played well two players.

Although in the fall Lakers Vs Celtics came out and I didn’t play this near as much. That game was clunky but it had an NBA license and was very stat based, and players had different skills and speed etc. I think Impreffered that. But there was room at time to play a simple game like this. Sega really had two player games locked down early. If you had a friend to play with their where a lot of multiplayer offerings.

Still can’t really call this great. But there was nothing wrong with it per se. I’d have a hard time wanting to play it now though. Sports games don’t age well, (except for a few)

I’m just shocked at how improved Sega’s sports games are over the MS and SG-1000 titles. I’m sure better ones are coming too, though given the reliance on stats, I’m not sure how much I’ll enjoy them.

I find it funny that both the US boxart and the title screen, so in other words the only things this game has to do with Riley, both look awkward and not really like Riley. The boxart uses a kinda blurry picture with a questionable expression on Pat’s face, and the title screen looks downright derpy; I had a hard time even understanding what emotion he’s trying to convey, after thinking it was some kind of anger-ish encouragment (he was a couch afterall) or surprise, I’m settling on an ill-fated attempt at happiness over a nice dunk or something.
Ill-fated thanks to SEGA’s artists, I’m sure the actual picture it’s based on makes it clearer.

Good Lord that Genesis cover is uninspired. I think it rivals Ghost House on the Master System for lack of interest on the part of the art team

Lmfao. This game was classic. Unfortunately it did not make my top ten sporting games of my lifetime. Here check out my list..
https://thecouchsports.com/2016/07/05/tareaus-top-10-sporting-video-games/

Nice list! I know very little about sports games, so I’ll be learning as I go along in my Sega quest.

No problem man anything to help