The original subtitle for PSIII in Japan was “Successors of Time.”

Purple Rain II: A Prince for All Generations

Before I began Phantasy Star III, I was told by well-meaning fans of the series to run and hide under a desk, lest I be destroyed with the game’s 50+hr nuclear blast of mediocrity. I’m pleased to report that, despite some battle wounds, Phantasy Star III is neither as bad as its reputation suggests nor good enough to be considered an underrated classic. Its epic multi-generational story remains ambitious today, but the game is marred by its halfhearted presentation.

“The Legends of the Past Shape Our Lives and Those of Our Children.”

With this sentence, Phantasy Star III unravels its story of conflict between Orakio the swordsman and Laya the sorceress. 1,000 years before the game begins, these two people and their respective followers fought bitterly against each other. A potential truce was in the works before both Orakio and Laya seemingly disappeared into thin air. Both sides blamed the other for their leader’s disappearance and settled into an uneasy, unresolved co-existence.

What does this backstory have to do with the overarching Phantasy Star mythos? Absolutely nothing. Rather than resolve Phantasy Star II‘s ambiguous ending or tie in Mother Brain and the Algo System into the latest entry, writer/director Hiroto Saeki crafted an original story with several generations of characters that have nothing to do with those from the previous two games.

The introduction also feels like it emerged from a different RPG series. You begin the game as the Orakian Prince Rhys, a dashing galoot who’s about to marry the mysterious Maia. Suddenly, a dragon emerges and whisks her away to parts unknown. Rhys vows to rescue her and the game begins. Up until this point, the Phantasy Star series focused less on generic video game tropes – woman kidnapped, man must rescue – and more on original sci-fi plots. Even today, the first two Phantasy Stars have some of the more interesting stories you’ll find in an RPG. Phantasy Star III initially follows a more traditional fantasy plot, much to many fans’ chagrin.

You’re not the boss of me!

Bear with the initial fantasy trappings, however, and you’ll be rewarded with cyborg companions, intermittent trips to two different moons, and the ability to craft the story via player choice. As Prince Rhys progresses through his journey, he’s joined by the Orakian princess Lena, the mysterious warrior Lyle, and two cyborgs, Wren and Mieu. Once you’ve rescued Maia, you learn that she is a Layan princess. The game then gives Rhys a choice: marry Lena and become king over the Orakian territories of Landen and Satera, or marry Maia and become king of Cille, a Layan city, thereby renouncing your claim as an Orakian prince. Whomever you marry will birth a son, and said son will be the main character for the next chunk of the game.

Not that hard of a choice, really.

The story spans three generations of characters, but who you marry and sire determines the events of that portion of the game. For instance, when Rhys marries Maia, she gives birth to Ayn. Since Orakians have excellent sword handling abilities and Layans have Techniques, Ayn possesses both his father and mother’s talents. Ayn’s story also takes place from the perspective of the Layans, who have their kingdom invaded by evil cyborgs. If Rhys marries Lena, she gives birth to Nial. In this case, both Rhys and Lena are Orakians, so Nial’s proficient with swords, but has no Techniques. His story involves the invasion of monsters into the Orakian kingdoms. You’ll also have different party members depending on which son you have, though since cyborgs don’t technically age, Wren and Mieu will linger with your party for all three generations.

Techniques are helpful when it comes to killing these freaks.

In the third generation, you will control one of four people – Sean, Crys, Aron, and Adon – until the final fight. Unlike the second generation sections of the game, the third generation’s story points don’t differ much depending on who you control. Each character has his own ending, however, which makes Phantasy Star III one of the first RPGs to feature multiple endings.

Indeed, the characters and the generational system are the lifeblood of Phantasy Star III. Yes, the first generation with Rhys is a boring stroll through monotony, but once you have a son, the 1,000 year conflict between two races and their generational multitudes opens up and becomes surprisingly engaging. No RPG up until this point had offered branching pathways complete with their own separate stories. In fact, if you want to ingest the complete conflict between the Orakians and the Layans, you’ll have to play the game multiple times to gather all the story points. (For those who have played the game before and are interested, my playthrough went like this Rhys —> Ayn —> Sean).

To make it through the game’s compelling story, you’ll have to do one of two things: fast-forward through a Let’s Play, or buck up and fight through uninspired landscapes.

Most of the worlds are lush and surrounded by water and forest.

The game’s presentation is pathetic compared to the previous entries. The character sprites are less detailed and colorful than those in Phantasy Star II, and the worlds are mostly indistinguishable from each other. Outside of Aridia and Frigidia – the desert and ice worlds, respectively – it’s hard to tell whether you’re in Elysium, Aquatica, Landen, or Draconia without a hint book or some serious map-making skills. And unlike Phantasy Star II, which came with a prepackaged hint book, you had to purchase a hint book from Sega for $14.95 (in addition to the $80 you just spent on the game).

The towns and dungeons are equally lackluster in their design. Both appear to have been constructed from one generic template, then re-arranged depending on the location. Towns are all surrounded by forest, have some mixture of shops, people with crucial information, and for some reason, an abundance of fountains. Dungeon layouts aren’t as confusing or infuriating as those found in Phantasy Star II, but they also don’t contain much atmosphere. They’re oversized basements with glass walkways, unnatural elongated corridors, and random mechanical parts that occasionally hinder your progress.

Welcome to Every Town.

For as much as I despised the overly grindy nature of Phantasy Star II, the simple battle system was perfect. There were two options: Fight, which brought you instantly into the battle, and Strategy, which let you customize your character’s next action. Phantasy Star III‘s battle system is a slight regression from that simplicity. When you get into a battle, there are four icons on the right hand side, with each one symbolizing a different move. Automatic Battle (new to the series) chooses how your characters fight until you press the B button, Regular Attack is a party attack that ends after one turn, Options lets you choose whether to attack, use Techniques, etc., and Run Away is an option to flee that doesn’t always work. It’s not difficult to adapt to the icons, but the new system feels needless, particularly when Phantasy Star II‘s worked so smoothly.

Amazon women are a real nuisance in the not-too-distant future.

On the plus side, Phantasy Star III does address the laborious grinding problem found throughout Phantasy Star II. In the latter, grinding was essential to progress from one area to the next without swift death. In Phantasy Star III, however, the pacing is perfect. The random encounters found when walking from one area to the next are all the battles your characters will need to level up appropriately. Occasionally you will need to fight a few extra battles to earn Meseta for items, but not nearly as often as in PSII.

Techniques make their return from Phantasy Star II, though there’s less of them and their power can be modified. The four categories of techniques are: Healing, Melee (attack), Order (mixture of enhancements and special moves), and Time (stops enemy attacks and increases character’s speed/attacks). Each type has four techniques and costs a certain amount of Technique Points, with healing being the most expensive (5TP).

Technique Distribution is one of the best parts of Phantasy Star III.

In each town, there are Technique Distribution shops which allow you to enhance and decrease the strength of your respective Techniques. Once you select the category (Melee, Order, Healing, etc.) you wish to modify, you’ll see a square constructed of four different colored shapes, with each shape representing a technique. You can adjust the shapes in any direction you choose, and the more a certain shape is represented on the square, the stronger that Technique will be. So, if I wanted to increase my character’s healing skill, I’d make the shapes representing Res and GiRes dominant on the square.

You got hypothermia, I got a rash, who cares.

If only Sega had taken as much time with the gameplay of Phantasy Star III as they did with the story. Development was supposedly rushed in order to release the game as soon as possible, and nobody from the first two games worked on the third one. It shows. Ugly visuals that don’t take advantage of the hardware, a forgettable janky soundtrack, and uninteresting worlds that barely differ from one another all point to a severely missed opportunity. 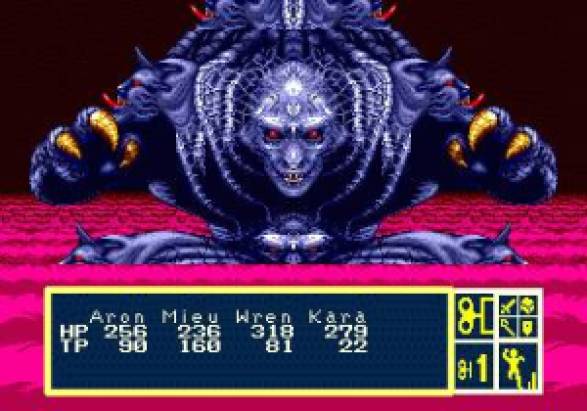 Dark Force, as ugly and powerful as ever.

Had Phantasy Star III received a few more months development time, there’s a chance many would consider it their favorite in the series. Personally, I was able to persevere through the average gameplay and enjoy the fantastic story, but I can understand why so many fans were, and still are, disappointed. The potential for true greatness is buried beneath the half-finished foundation. Unfortunately, as so often happens in any form of media, art and business make for frustrated bedfellows. Sega’s rushed development led to low sales and a pissed-off fanbase. And while the company arguably learned their lesson with the triumphant Phantasy Star IV, the mishandling of Phantasy Star III remains a blotch on an otherwise immaculately crafted series.