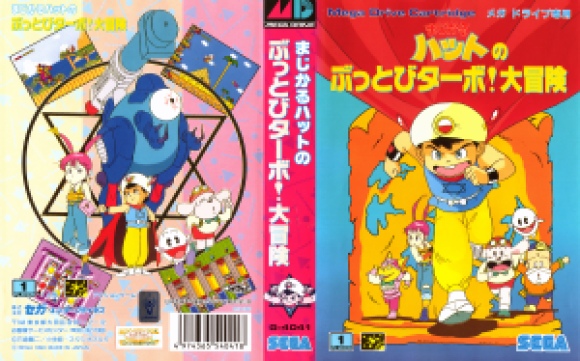 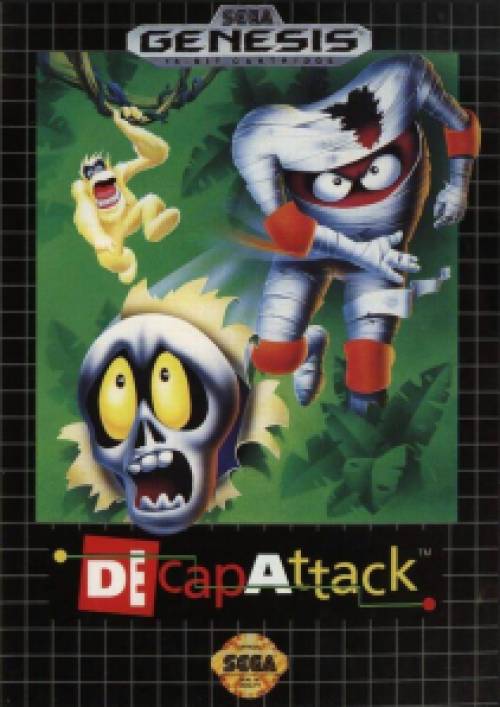 That ape is really upset by the skull-throwing torso, as we all should be.

Think hard, children. Would you rather play as an Arabian child who throws an egg, or a headless torso who throws a skull? Would you rather stumble around in quirky, colorful anime settings, or hobble through a series of dark, dreary worlds? Would you rather fight to reconnect islands that actually look like islands or body parts that look like islands? Your response to these three questions will determine just how much of that edgy, never-say-die 1990s spirit you still have – and whether Magical Hat… or Decap Attack is the game for you.

Magical Hat’s Turbo Flight Adventure is based on the anime “Magical Hat.” In essence, the main character, Hat, falls into the underworld known as Devildom and has to defeat the evil king, Jiark. “Magical Hat” never saw an English dub/sub in the late 80s/early 90s, and as such, its game tie-in stayed put in Japan. Developers Vic Tokai knew they had a decent game on their hands, however, and reskinned the game as Decap Attack. Gameplay-wise, both games are incredibly similar, but Decap Attack‘s story, characters, graphics, music, and level layouts are completely different from Magical Hat.

In Decap Attack, you play as Chuck D. Head, a headless mummy who has to destroy Max D. Cap and his underworld army from destroying the earth. As in Magical Hat, each world is an island that’s been disconnected, though in Decap Attack‘s case, the islands are all body parts because… he’s a mummy? Most of the beings in the game are some form of supernatural ghoul? Sure, why not.

What the heck, this otter enemy is cooler than the main character.

Hat and Chuck D. Head don’t move like normal platforming protagonists. Rather than falling down like lumpy sacks of potatoes, as Isaac Newton intended, they’re able to float downwards, allowing them to avoid potential disaster. Both characters also have some slipperiness in their step, like they put Crisco on their heels. Normally, slipperiness in a platformer can equal death, but I was surprised by how rarely it caused me damage. Don’t run into the unknown or try and stop suddenly, and you’ll never have a problem with it.

A little slip slide might actually help this situation.

While Hat/Chuck can jump on an enemy several times to take them out, punching is more effective – and more dangerous. In Magical Hat, if any enemy touches you once, you’re dead. In Decap Attack, you have a life bar, but enemies are more aggressive. The weapon you want to have with you at all times is your throwable item (the egg or the skull, depending on the game). This item has great range, kills just about any enemy with one hit, and returns to you regardless of where you throw it. If you get hit once, however, the item goes away and you have to find it again.

“Hey buddy, have you seen my skull? I’d really like to hit you with it.”

There’s a sense of freedom within the level design that I haven’t seen much in Sega-published platformers up to this point. The levels are mostly wide open, with multiple paths and hidden secrets. There’s no time limit, so exploration is encouraged and occasionally necessary. The only cap to this freedom are the enemies, most of which have a devious unassuming nature that makes them seem less dangerous than they are. They’re not hard to kill, but they do blend into the environments well. If you’re not paying attention to your surroundings, it’s easy to get hit.

In the third level of each world, you have to find a special item hidden in one of the level’s breakable statues in order to beat the level. Even if you’ve beaten the boss, you still won’t be able to progress unless you’ve found the hidden item. In Magical Hat, this item is located conveniently in a statue near the exit of the level. In Decap Attack, however, the item is hidden in a random statue somewhere in the level. 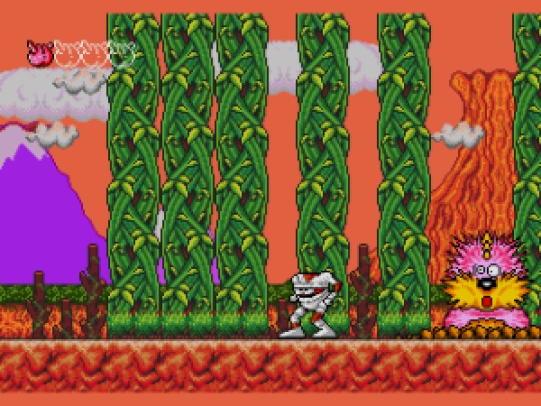 Breakable statues are everywhere in Decap Attack. Once broken, they either contain: nothing at all, a potion that gives you extra power, or an enemy. Nothing is stupid and pointless. Enemies are mean. The potions are ok, but I found myself forgetting about them. Depending on their color, they provide help like short-term invincibility to freezing all on-screen enemies to running faster and jumping higher. The invincibility is very helpful, particularly when you’re asked to navigate through a string of enemies, but I rarely used any of the others.

Decap Attack/Magical Hat is actually the third in a side-scrolling platforming “series” developed by Vic Tokai. While not an official series, per say, all three of these games share certain characteristics, like funky physics and throwable weapons. Kid Kool and the Quest for the Seven Wonder Herbs came first and remains a disaster of a first try. Kid Kool controls like a really bad wind-up pitch (hot garbage, basically), which makes the game almost impossible to play. Psycho Fox is a much-improved second attempt with a stronger protagonist who doesn’t move like a jackass. The game’s still incredibly difficult, but it’s playable, unlike Kid Kool. 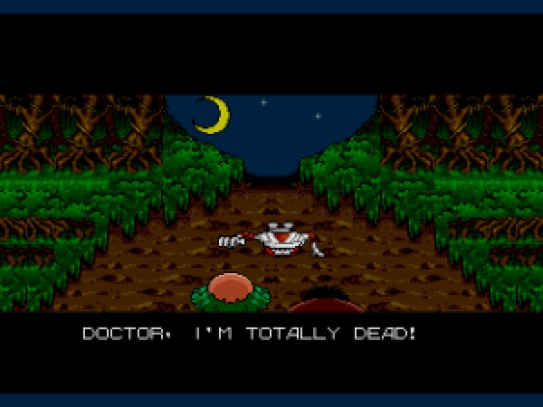 The doctor is stunned by such stupid words.

Let’s examine, shall we? Magical Hat…‘s visual appeal has aged better than Decap Attack. Cartoony innocence rarely goes out of style, whereas trying-too-hard always has an expiration date (Chuck D. Head is a grotesque thing that could only have been created – and accepted – during the “Goosebumps” decade). However, Decap Attack does have more balanced difficulty and a stronger soundtrack that takes full advantage of the Genesis’ chunky synths. Each game has excellent level design that encourages repeat playthroughs and good controls that, while slippery, forego most of the awkward inertia-based physics of their predecessors.

Decap Attack‘s makeover was a mistake.

For Americans/Europeans who aren’t able to experience Magical Hat, take heart. Decap Attack sure isn’t pretty or charming, but hot tots, is it satisfying. Rare is the title where I hate the main character, hate the art style and overall feel of the game, yet still walk away impressed. Y’all need to get on this if you haven’t already. So far, it’s one of the most enjoyable platformers on the Genesis.

Wow, high praise! I like what I’ve played of DecapAttack, but it always looks really dreary to me. Should probably try it again, based on this review!

It is really dreary… but it’s also really fun.

Just from hearing that it was adapted from a game called “Magical Hat” and the fact that Chuck throws his skull, I’d always thought that his original counterpart, you know, threw his hat.

That would make more sense, yeah?

Psycho Fox may be my favourite SMS game but I haven’t yet been able to get past the graphics of Decap Attack (although I have to say that some of those backgrounds look surprisingly pretty). I’m glad you liked it so much though – it bodes well for when I eventually try Magical Hat. Thanks for bringing the Decap Attack review forward to enable a direct comparison of the two.

No problem! Magical Hat sounds like it might be more your bag and I don’t blame you.

I owned (and enjoyed) Decapattack in the 1990s and recently played Magical Hat on an emulator. I never liked the drab colours of Decapattack, so I found Magical Hat to be a much more uplifting experience.

What I don’t understand is why, for the western market, the developers didn’t consider rebranding Magical Hat as the Megadrive version of Psycho Fox. All they would have needed to do was change the sprite and tweak a few other elements.

“What I don’t understand is why, for the western market, the developers didn’t consider rebranding Magical Hat as the Megadrive version of Psycho Fox. All they would have needed to do was change the sprite and tweak a few other elements.”

YES. This would have been great. Psycho Fox 2: Electric Boogaloo or something.

Hi Dylan!
My apoligies for not checking in more regularly! IGlad to see that you are still doing a great job!

One of my recurring observations (reading this blog and watching chrontendo) that keeps astonishing me: Platformers like this game make up a surprisingly small percentage of overall 8- an 16-bit releases (at least up to 91 – where you are currently at)! When I was a kid at least 75% of my game collection (as well as that of my friends) consisted of platformerrs! I’m not quite sure how to explain this discrepancy.

Well… platformers were pretty big on Nintendo consoles, like the NES, SNES, and N64. Not so much the Genesis, although there would be more after the success of Sonic. I know what you mean, though, platformers were my favorite genre when I was a kid. I definitely had more of them than just about any other type of game.

I will be the minor voice of dissent here and say it: I LOVE DECAP ATTACK! I have always enjoyed the graphics. Sure, the dreariness I get, but it’s still really colorful, and still quite cartoony, even with the whole horror motif. I get a kick out of Chuck D. Head as a protagonist, because he’s just such an unlikely “hero” figure, and I feel like the game’s graphics do a great job of conveying both the siliness of the whole concept, and yet still feel like you’re in a world that’s just not right. Glad you mentioned the Kid Kool and Psycho Fox connection. In terms of gameplay, the third time was the charm, as this game controls well and is easy to take to comparatively. Also glad you spotlighted the soundtrack – one of my favorite on the system! I love the bass-heavy tunes that have that quality where they’re kind of dark and foreboding, but at the same time, also kind of bouncy and whimsical, if that makes sense. I still have my copy from childhood, and I still pull this one out from time to time. I would like to acquire a copy of Magical Hat, though, so I can do some comparisons. I suspect I’ll still prefer the Americanized outing, but it would be interesting to see the original game.

Something you didn’t mention that’s worth noting: this game is absolutely incompatible with any 6-button Genesis controllers. For most games, you hold down the “Mode” button while booting them up, but for some reason, Decap Attack doesn’t play along. So this game is, unfortunately, completely unplayable on the Sega Nomad. That always hurt my heart a bit, because I used to take my Nomad with me to a 3rd shift job, where half of it would be spent sitting on my keister with nothing to do. While I enjoyed a number of other Genesis games during that time (Shinobi 3, Jewel Master, Sonic the Hedgehog, etc), I was unable to enjoy this particular game because of that limitation.

Retrospectively I prefer Magical Hat’s aesthetic, however 90’s me wouldn’t have gone anywhere near it and would have much preferred Decap Attack.

I remember buying this game when it first released. At the time I didn’t really like it that much. Over the years the game started to grow on me. I don’t think I like it was much as you do but it is a good game overall.

Thanks for the review.