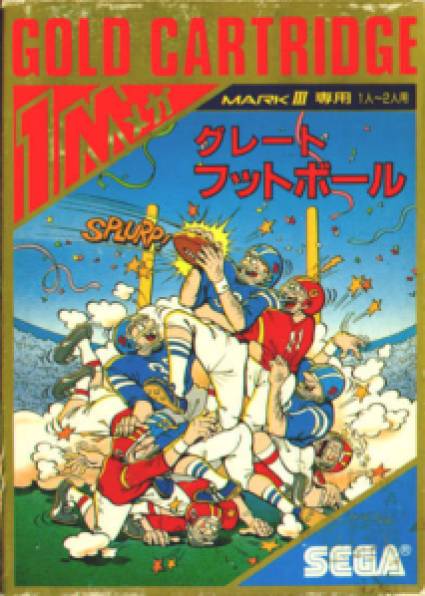 Football games sucked until Tecmo Bowl. The perfect blend between arcade action and simulation, Tecmo Bowl told all other football games to go home and be family men. Name one even decent football game that emerged before Madden other than Tecmo Bowl. You can’t, because there are none. This statement is coming from someone who dislikes football, granted, but deep down, even long time gamers/football enthusiasts know it to be true.

With that being said, we come to Great Football, Sega’s cautious, confusing entry into the world of virtual pigskin that arrived two years prior to Tecmo Bowl‘s 1989 NES debut. The problem with Great Football is that it’s really only half a game. Only if you’re playing with a friend will you be able to enjoy a full-length, four-quarter football game. If you’re playing by yourself, the game automatically starts you in the fourth quarter of a game with the computer being up by a certain amount of points and your team having zero points. What happened to the first three quarters, you ask? Perhaps Sega felt that a shorter football game was better than a longer one when you’re playing by yourself. As someone who doesn’t care for America’s most treasured sport, I could not agree more with this reasoning. As a gamer, this lack of content is a rip. Two-player mode proves that Sega could provide a full football experience. Why not one-player, as well?

The game’s over before it begins.

The football contained within Great Football is about as thrilling as a deflated pigskin. While you do have two different leagues – the NFC and the AFC – to choose from, all the team names are fictional and none of the teams move slower or faster or are any better or worse than any of the other teams; no football team left behind. Your football players control ok, but they run as if they have sackfuls of change in their pocket, while the opposing team runs like they drank six Red Bulls each before taking the field. In between downs, you’re shown eight plays that cycle through automatically. Plays 1-4 are pass plays, while plays 5-8 are run plays. You pick the one you want to use when it’s highlighted, but there’s no cursor or other indication to show that the game registered your choice. When you get on the field, you basically hope for the best, with the play or without it. That being said, stick to the run plays. Passing is nigh impossible, thanks to the wonky aiming system.

Look at all those formation pellets!

A theory: Sega wasn’t very pleased with the computer AI in the one-player portion, but they knew they needed a one-player mode so they shortened the length of the football game. How else to explain both the lackluster gameplay and the dearth of content? Now, to be fair, I know Sega was more or less developing every Master System game at this point. Developers were probably working triple shifts just to make sure that crap like Great Football was at least playable. If the latter was the case, the game is a success as it is, in fact, playable – for whatever that’s worth. But it doesn’t come close to delivering on its moniker’s promises of greatness, and worse yet, it’s not Tecmo Bowl. There’s no reason at all to tackle Great Football.

Football and trackball meet at last.

Sports Pad Football is Great Football, but played with Sega’s underutilized Sports Pad instead of the regular Master System controller. Were Great Football a better game, this peripheral attachment may have meant something. But since the Sports Pad is a mere trackball with buttons attached and is unable to magically add content to the one-player mode or tone down the god-like AI, I fail to see the purpose of this re-packaging. Except, perhaps, to bilk more money out of consumers who thought Sports Pad Football might be different/better than Great Football. Shame on you, Sega. We were all less informed in 1987, and you knew it.