Chad Bro-chill delivers an enchanting musk to the crowd.

I know what these images are, but their placement confuses me.

My opinion of most sports games is largely negative, but video game golf can be pretty ok if executed properly. Sega’s earlier iteration of golf – also called Great Golf – was about as good as 8-bit golf could be. The game had a clean isometric viewpoint, spot-on controls, and no personality whatsoever. So far, it remains one of Sega’s best sports games. Shame, then, that Great Golf never saw a release outside of Japan. The version of Great Golf being looked at today is the sort-of sequel that was released for all territories (the game was retitled Masters Golf in Japan to avoid confusion). Sega must have had a better feeling about this one. A Golf Game for All Nations, so to speak. And yet, Sega’s first college try was better because it wasn’t trying hard – at all. Great Golf  ‘circa 86 was so light, you could carry her off the course with one hand. Great Golf ’87 is Sega trying to show off the power of the Master System, while weighing the golf down in the process. 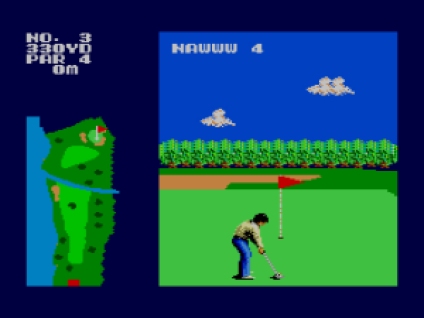 Not sure when golfers started wearing Levis, but it’s a trend I can get behind.

Great Golf shows promise when it begins, though. You have your choice of Stroke Play or Match Play – two glorious options! Match Play is the two-player version where you and a buddy fight to get the best score on each hole. Whoever wins ten holes first wins the match and a year’s worth of cardigans. Stroke Play is me (sitting by myself on a Wednesday night with a cup of coffee) playing through all eighteen holes to completion. You can screw around all you want in Stroke Play: chop balls into ponds, dig trenches in the sand, whatever. Regardless of your score, as long as you sink the ball into the hole, you move on to the next hole, and so on until all eighteen holes are completed.

Before you get busy child on the course, you have to pick all your clubs. Normally, golf games – including JP-only Great Golf – give you the clubs you’ll need for the course, but not here. Pick them yourself, Sega says, you’re a grown-ass person. This sounds promising. Sega seems to be assuming that the player already knows a thing or two about golf. But no, Sega doesn’t have as much faith in you as you might think. You’re allowed to select fourteen out of seventeen clubs, so in other words, you pick the fourteen you want, and leave three behind. “Gee, wouldn’t want to make the seven iron feel unloved – what a moral conundrum for the player!” remarked the one developer who fought to leave this option in the game. “Select your clubs:” neat, but pointless. Sega should have just held our hands. 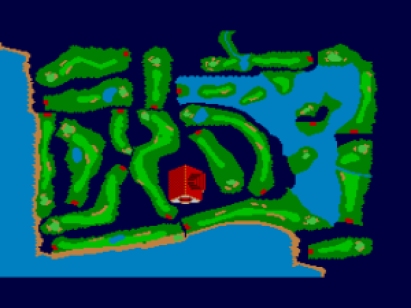 Yes, this is a children’s placemat.

Then comes the stroke play. Instead of an isometric view, a behind-the-person viewpoint is established. While I prefer the isometric angle, behind-the-person is standard for most golf games and it works ok here. There is also a crudely rendered overhead map of the entire hole on the left hand side of the screen, along with some course information, like the number of yards to the hole, wind direction/speed, etc. You go to hit the ball and you’re given the option to shift your golfer’s feet, as if a slight loafer shuffle to the left or right would help you get that elusive birdy or bogey or Bacall. The power meter rises. Finally, you hit. The ball soars, but you won’t know where unless you follow it on the overhead map.

The ball seems to land a lot faster if you watch it from the golfer’s point-of-view – an observation, not a complaint – and it goes, more or less, to where you’re aiming it. But herein lies the game’s main issue: I never felt like I had complete control over the ball. That might sound silly, like, why would you have control over a golf ball you just smacked to the heavens? The ball’s in God’s hands now! But Great Golf ’86 gave you that control – in spades. Here, Sega sacrifices control of your ball for the illusion of more sophisticated graphics. I say “illusion” because the graphics are terrible, though apparently, Sega thought them good enough to leave in (see also: Space Harrier). Gone is the shrunken isometric cutesyness of the earlier Great Golf and in its place are courses that look more “realistic” (whatever that means), yet take forever to load; normal-sized golfers sans faces; and the notion that following your ball’s trajectory on an overhead map is easier and better than following it as it flies real-time across the course.

Now I’ve done it. I’m not sure what exactly, but I have.

I’ve written way too much about a long-forgotten golf game that nobody remembers. And if I’m honest, you could probably play a solid eighteen holes in this game and not hate your life. So why waste the time and energy to excoriate a meaningless distraction that probably took Sega a couple weeks to program? Because Sega had already made a far superior golf game. And instead of simply re-releasing that version for Europe and the States – at zero cost to them – they chose to waste money out of their own coffers, along with a couple of programmers’ time and energy, to make Great Golf. Poor decisions add up over time. Sega’s poor decisions have added up over time. I love you, Sega, but Great Golf is one of many reasons why you’re bringing me down.

It may be “great” but it’s no Lee Carvallo’s Putting Challenge….wait.

It’s a decent golf game and the first one I ever tried. When I bought it, it was only one of two games my friends and I would play together (Parlor Games was the other). We had a lot of fun goofing on the nuances of Great Golf and figuring out what worked and what novices shouldn’t try. To this games credit, it did let you learn how shitty it was to land a ball in the bunker less than 20 yards from the cup. The graphics were pretty good to me and the controls worked (as far as I remember). There were a lot of times when whoever was leading the game would want to reset the game if they had one of the worst holes and lost their lead. For a couple of non-gamers and a couple of sort of new gamers, it was a pretty good time passing the controller. After this, I learned to like golf games and give them a try. To this day one of my friends still calls me by my golfer name occasionally.

The SMS actually has good golf games, this just isn’t one of them.

[…] Japanese-only Great Golf, Sega’s golf games up to this point – Champion Golf, the Western Great Golf – were triple bogeys. With seamless mechanics, an abundance of courses, and Arnold Palmer’s […]

Was that an LCD Soundsystem reference? I think we might have similar taste in music. I recall an early Questicle mention of Bright Eyes; I’m sure Gotye and Tom Waits have also made their way in. Now you just need to work in TV On The Radio and we’re set!

That is indeed an LCD Soundsystem reference. Don’t like all their stuff, but they do have some solid jams.

Agreed. They sometimes get a bit too experimental for me, but they’ve got a handful of essential songs.