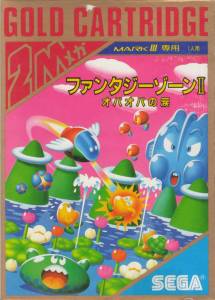 When the winds of fantasy blow, they blow hard.

Sega wisely omitted “Tears of Opa-Opa” from the title for beefcake American audiences.

Fantasy Zone II: The Tears of Opa-Opa is everything a vainglorious technicolor dreamcoat sequel should be. It’s faster, brasher, and – thank God – more colorful than its predecessor. You’ve seen those 1000-ct Crayola boxes, yeah? With colors like “Macaroni and Cheese” and “Chartreuse Sherbet?” That’s how Fantasy Zone II looks: like the inside of a demented Crayola maker’s mind. All praise due to Sega and its Master System for producing the console’s richest-looking game to date. Graphics aren’t everything, but when a game looks as gorgeous and plays as solid as Fantasy Zone II, then you might as well throw your NES against a wall or something*.

A spring wonderland filled with snowmen and chubby ripe tomatoes.

Fantasy Zone II largely sticks to the foundation of the original. As in the first game, you control Opa-Opa, a spaceship with feelings, and the tears of whom you’re trying to quench. In each level, Opa-Opa is tasked with destroying all of the bases. The bases are recognizable immediately: they all have faces and spew out enemies from their nethers. But a level is not simply conquered by base-destroying, oh no. Opa must also avoid the waves of pattern-based enemies that come without fail and wish his tears never to cease – while he’s destroying the bases.

Thankfully, Opa can be made powerful. He starts with a double shot weapon and bombs, which can be upgraded (along with engine/speed upgrades to your ship) via shops in each level. In order to purchase these accoutrements, Opa must collect coins and bills dropped by enemies. In the first game, these shops manifested at random intervals throughout the stage. You needed to catch the shops to enter them, and once you purchased what you wanted, they drifted away. Here, the shops remain grounded to different parts of the level, so you can re-enter them as many times as you’d like. To recap: shoot and bomb everything you see, particularly the bases, collect the precious bounty dropped from their remains, find a shop, purchase more firepower/speed, admire the surreal beauty of the landscape, mend Opa-Opa’s heart. 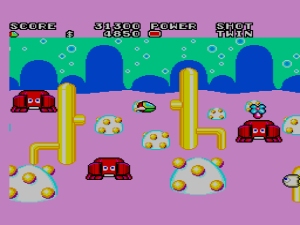 The biggest difference between the two Fantasy Zones are the way in which the levels are constructed. In the first Fantasy Zone, each level was one long screen. Opa could travel left or right at any time, but all of the bases were located in one area. In Fantasy Zone II, there are more bases than ever before, and they’re connected through warps. Two kinds of warps are unearthed by destroying bases: blue warps, which warp you to a different part of the level entirely (complete with a new surreal background), and red warps, which take you to the boss after you’ve defeated all of the level’s bases. I could see how this feature might become confusing at times – particularly in later levels, where there’s about five sections per level – but I felt the warps added to the appeal of the game, and provided Fantasy Zone II with its own personality, separate from the original.

Fantasy Zone II is even harder than the first game, albeit not at first. The first few levels in FS II are not nearly as ball-busting as the original; perhaps because the levels are longer? Sega probably wanted to ensure that players would grasp the concept of warping through the level to different sections. If the levels became as hard as quickly as they did in the original game, Fantasy Zone II would be nigh unplayable. To wit: I remember being completely overwhelmed by level 3 in Fantasy Zone, but in Fantasy Zone II, I made it to level 5 without breaking a sweat.

After level 5, though, Sega takes your confidence down a dark alley and pummels it against a wall. The tears – both Opa-Opa’s and my own – poured out of our beings, as enemies who once drifted aimlessly by Opa came raging towards him, like bats out of some art deco hell. For many Fantasy Zone veterans, the real challenge will begin here. If you are one of the few who have beaten Fantasy Zone II – after weeks of practice and Kleenexes aplenty – I commend your abilities.

Just look at that background! So fresh, so clean!

Despite the increased difficulty, Fantasy Zone II is a vast improvement over its predecessor. Every aspect of the original – from the controls to the shops – has been refined to near-perfection, and the new level progression via warps gives the game an added depth missing from the first entry. The graphics, backgrounds, colors are overwhelming. Fantasy Zone II is one of the prettiest 8-bit games I’ve ever seen, and I’ve played enough 8-bit games for a couple lifetimes. Even if you were iffy on the original – based on my bi-polar grade, I know I was – Fantasy Zone II deserves your attention. Like the best sequels, it takes what worked about the first and adds to it, resulting in what is – as of now – the perfect expression of Fantasy Zone on the Master System.

*Ok, maybe don’t throw the NES against a wall. It might come in handy if you want to play Mega Man II or Die Hard some time down the line.

11 thoughts on “Fantasy Zone II: The Tears of Opa-Opa” 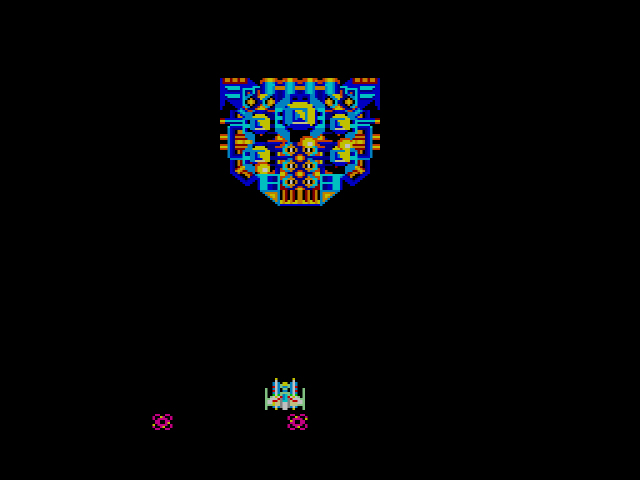 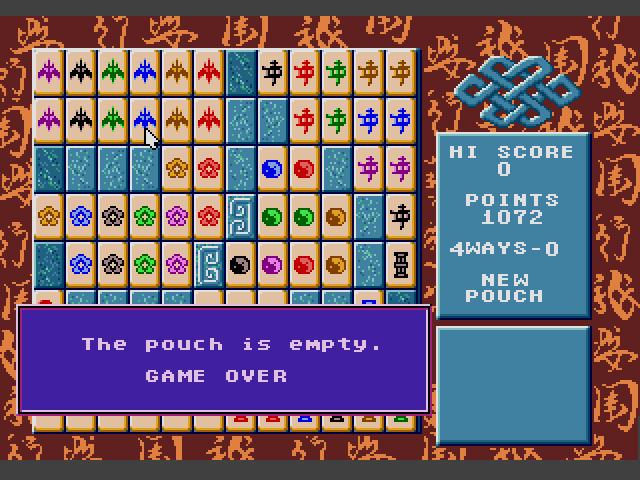 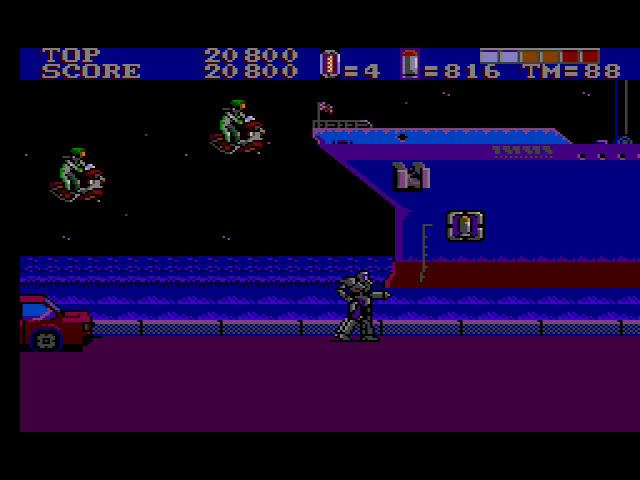