Sega finally decides to contribute to its own add-on for the LaserActive.

Triad Stone belongs to a rare and mostly forgotten breed of video game: the animated arcade FMV game, or as I prefer to call them, “the Dragon’s Lair Clone.” This is a divisive genre with several problems: the games are short, barely interactive, and are more or less a collection of Quick Time Events. That being said, FMV games like Dragon’s Lair and Cobra Command have a certain charm to them, despite their issues. 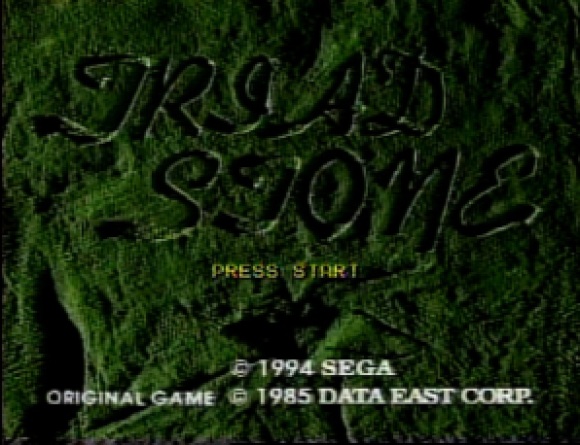 The most expensive, and therefore, best stone on the market today.

Triad Stone‘s production values aren’t as high as the aforementioned games. The game starts off with an unseen narrator talking over video footage of a real – and cheap looking – set. The levels all consist of cartoon segments that look like a 1980’s anime show, and the story segments between levels are just plain text over a static backdrop. The cartoon art style is aesthetically pleasing, and the animation was decent, barring a few rather choppy scenes I encountered during my playthrough. As a whole, though, Triad Stone feels like it was cobbled together.

Hold your breath, playboy, it’s all downhill from here.

This is the only game Sega developed for the LaserActive, and if I had to guess, it was something they slapped together at the last minute using leftover footage from a canceled Data East LaserDisc arcade game. Perhaps if Triad Stone sold well, it would have warranted Sega’s further involvement for the LaserActive. Or perhaps the game was nothing more than a cheap way to fulfill a contract obligation with Pioneer. 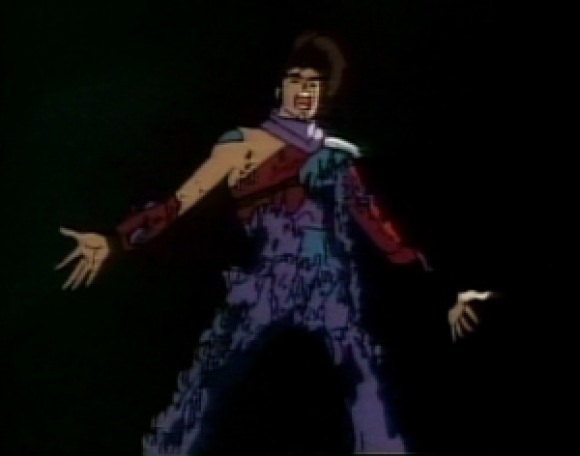 Hemorrhoids are no joke, folks.

The story is nothing special. An evil king has stolen a magic stone that grants him immense power and uses it to rule the land. The stone breaks into several pieces and spreads across the land. Only our hero, the son of the man killed by the evil king, can collect them all and save the day. 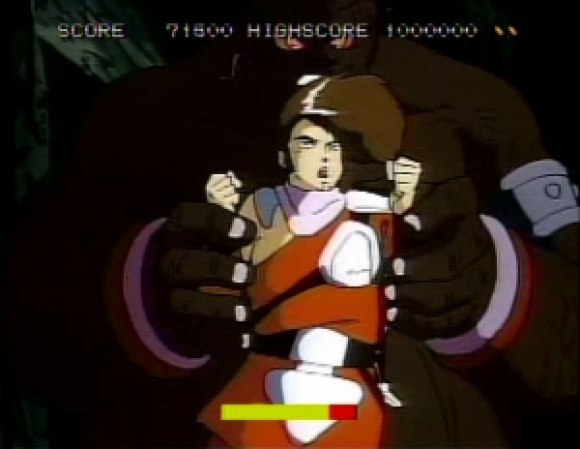 Our dude can’t catch a break.

The gameplay is shallow and basic, as you would expect from this style of game. The button prompts on screen usually consists of pressing a direction on the d-pad. You’ll also mash the Power Button to fill up a bar, or press a direction and the Sword Button to kill things. 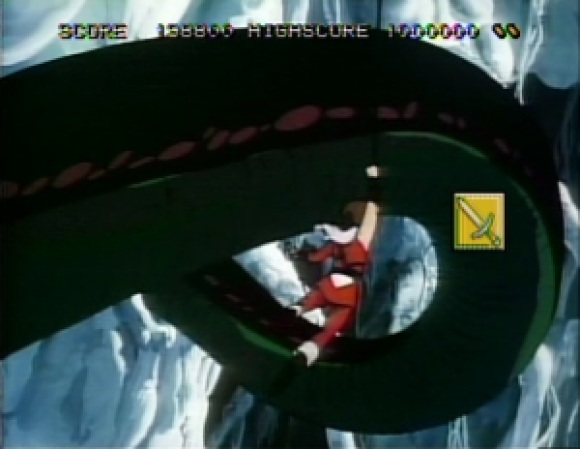 The game’s Sword Prompts give you a too-short response window, compared to the commands.

Timing is the biggest issue with games like this. The best ones in the genre give you enough time to respond to the on-screen prompts; they make the game challenging without seeming unfair. Unfortunately, Triad Stone doesn’t quite get it right. Even on the easy difficulty, it feels like the game doesn’t give you enough time to respond. The Sword commands in particular were troubling. If I wasn’t holding down the Sword button and waiting to press the direction key the moment the prompt showed up on the screen, I was all but guaranteed to die.

Overall, if you’re a fan of FMV games, Triad Stone is probably worth a look, especially since there are so few games like this. For everyone else, I recommend Strahl for the 3DO and Sega Saturn instead. It was released about a year or so after Triad Stone and uses much of the animated footage found in the game, but frames it with a new story. It doesn’t look as good on those systems, since it was compressed to fit on a CD, but I found its story to be more engaging, and its gameplay more forgiving (at least on the 3DO) than Triad Stone‘s.

Another interesting review Taylor and rather unfortunate Sega didn’t bring their ‘A’ game to the table. But at this time they were supporting multiple systems.

By the way how long did it take you to collect all the Sega Mega LD games ? And did you collect any of the NEC LD-ROM games ?

I started collecting for the LaserActive in 2006. It took me about a decade to put my collection together, but for most of that time I was only casually pursuing it.

I only really started to actively hunt stuff down in 2013, and I had pretty much everything for it by 2015.

I say “pretty much” for a few different reasons:

1. Most LaserActive games contain both the English and Japanese language versions of the game on the disc, but a few of the edutainment titles don’t do that (so the Japanese version only has Japanese language options and the US one only has English). Since I don’t speak Japanese, I didn’t bother collecting those language variants.

2. Some of the games were released for both PACs, and since they play identically, I didn’t bother to buy both versions.

3. I’m also still missing the two rarest games for the system – Blue Chicago Blues and 3D Virtual Australia (which means I wont be doing reviews of them, unless some one wants to lend me their copies). I’ve seen fewer than 5 copies of Blue Chicago Blues go up for sale over the last decade, all of them incomplete. I’ve never seen a copy of 3D Australia show up anywhere.

I also collect for the NEC PAC, and have all of the different games for it. It’s got a lot fewer games for it and honestly, the hardest thing for it was hunting down an American NEC PAC. It took me a few years to find one of those. The Japanese ones are way easier to find and there’s no region locking for LaserActive games, so if you wanted one just for LaserActive stuff, that’s the easiest and cheapest way to go.

Worth a look for that fabulous hair alone.

The real Triad Stone was in his hair all along.

It truly is the game’s MVP.