Not quite a Koei game.

Let there be fools.

Shadow Blasters is akin to the straight-to-VHS action films that littered Blockbuster shelves in the 1990s. The story is vague and involves gods interfering with humanity’s debaucherous ways. The characters are top-tier martial artists, yet have names like “Horatio” and “Tiffany.” The settings take you everywhere from a futuristic space ship to a rundown inner-city harbor, all in search of continuity. Despite these very real warning signs, Shadow Blasters‘ bizarre production values contain a scruffy, what-the-hell’s-going-on charm, and the game’s intriguing upgrade system kept me engaged to the end.

Tale as old as man’s beginning: humans are evil, and the gods aren’t happy about it. Ashura, the King of the Evil World, notices man’s depraved state and swoops in to take advantage of it. Soon, all the earth is under his carnal power. A benevolent god known as Hyprion (probably Hyperion, but both the instruction manual and game refer to him as “Hyprion”) has mercy on the wicked Earth, and raises up four warriors to go and fight the evil Ashura and his demonic minions.

This boss is very Ninja Gaiden-esque.

The four warriors – in order of authenticity – are Marco, Leo, Horatio, and Tiffany. Both Horatio and Tiffany were trained in the ways of “NINJUTSU” (all-caps, courtesy of the manual), and are swift, but also weak. Leo is the best Japanese fencer of all time, despite using boomerangs as weapons, and Marco is a girthy Buddhist who’s “better at fighting the forces of evil than reciting the sutras.” Aren’t we all, Marco. 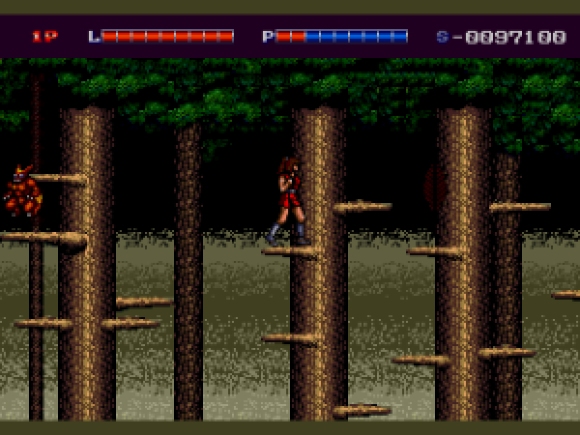 Tiffany’s having a fight with her boyfriend.

Shadow Blasters is basic pre-Final Fight brawling, with enemies running towards you in kamikaze fashion, while you fire your NINJA MAGIC to destroy them. Each warrior starts off with a standard attack, a jump, and a once-per-stage special attack. In addition to those, the warriors have Health Meter, a Power Meter, a Speed rank, and a Jump rank. The two ranks and the Power Meter are increased by collecting different colored emblems (your Health Meter can only be replenished by emblems, not increased). Emblems are found after you defeat random enemies, and you’ll need as many as possible to fully strengthen your team.

The face within the rock wall is a nice touch.

Speed and Jumping are increased with Red and Blue emblems, respectively. These might not seem like the most important attributes to upgrade compared to your power, but the slower characters like Marco and Horatio benefit greatly from full S and J ranks.

The future is bereft of life.

If one character dies, there’s no way to bring them back, so make sure to switch between characters and refill their health as needed. Crimson Emblems refill one bar of your life, and Explosive Emblems (they’re grayish-black) completely refills a character’s life bar. Switching between characters just to fill their Health Meter – or add to their Power Meter, or gain more speed, etc. – is tedious, but keeping all characters alive and as strong as possible will ensure that you witness the final epic battle in space with Ashura.

You can complete the first six stages in any order.

The eight stages are varied in design, but they’re also lacking in content. Enemies come at you in waves or not at all. Entire sections of each stage are completely bare. While you can explore a stage, your only incentive to do so would be to kill more enemies to get more emblems. The latter isn’t necessary once your characters are beefed to the nines.

The enemies and falling platforms found in each stage shouldn’t give you much trouble, but to beat the bosses in a timely manner, you’ll need characters with strong attacks and swift movements. For example, the giant blob tower known as The Tarman just wouldn’t go down against Leo’s powerful boomerangs, but three charged-up Dragon Attacks from Horatio made him explode faster than a boozed-up congressman. 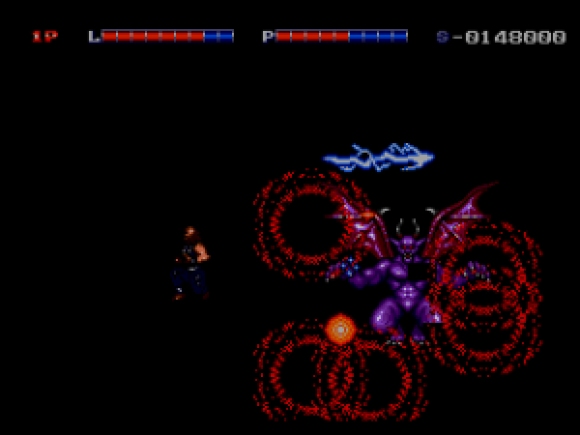 When your attacks make a high-ranking demon explode, you’re on the right track.

If you have a friend who doesn’t judge a game by its atrocious cover, you might consider co-op mode. Two characters share the screen and work their way through each stage at the same time. The mode itself works fine, and it’s certainly nice having a friend help you take down some of the more difficult bosses. That said, I found Shadow Blasters easy enough to complete by myself. With a friend, you could conceivably beat the game in twenty minutes or less without much difficulty.

I didn’t see your holy rear on the front lines, Hyprion.

The more I played Shadow Blasters, the more it seemed like some of the programmers cared about the game, while others wanted to finish and ship it as quickly as possible. The stages feel short and rushed, while boss battles are intense and often overextended. The simple brawling is beamed in straight from the Ghost of Master System Past, while the character upgrades via collectible items feel like the beat-em-up genre’s beautiful future.

Quite possibly The End of All Things.

Shadow Blasters‘ bargain bin leanings are apparent to anyone who’s ever played a handful of video games. But if the 16-bit equivalent of a low-budget martial arts film starring Christopher Lambert sounds appealing to you, you owe it to yourself to blast some shadows.

Fun game, a bit too short.

I really like this game, in the same way that I like 80’s/90’s B movies. It reminds me a lot of Mystic Defender (Genesis), and a little of Kenseiden (Master System), and has some early elements that would be refined more in games like X-Men.

I really want to play this as a two-player mode with a friend. Its the kind of game that would just be fun to play alongside a buddy.

Good review Dylan. Thanks as always.

Mystic Defender is a great comparison. Thanks Mike!

What the hey? I’ve never heard of this, but it seems kinda cool?

Man, that’s some cover on the Genesis version. On both of them, actually.

This game had me at the cover art.

The American cover art. Bring on the cheese!

I prefer the name Shiten Myooh. Wonder why they changed it.

To me, Shadow Blasters pales in comparison to similar Genesis games like Mystic Defender and Jewel Master (I’m curious to read your eventual review of that). The concept is nice, but the execution has some issues. Some of the stages practically require a specific character, or one with strong enough firepower that you can defeat the enemies. If you lose a specific character before a stage they’re basically required for, you have to REALLY get good at the other stages to make it through, because, like the original NES TMNT game, once you lose a character, they’re gone. Play the wrong stage with a character that primarily shoots in the upward or downward arching manner, when you really need a powerhouse, straight ahead attack, and again, you’re back to having to be a rockstar the whole level in order to survive. I know it’s a lot of trial and error, but when I played through this game a year or so ago, it just never felt like it was fully realized. The final boss battle, while a nice change of pace, is rather frustrating, and because I was unclear as to the tactics to beat him, probably took me 15 or 20 tries. I’m glad I played through it, but it will likely be no more than a shelf-filler from this point forward. I don’t see myself going back to it like I do frequently with the 2 aforementioned games.