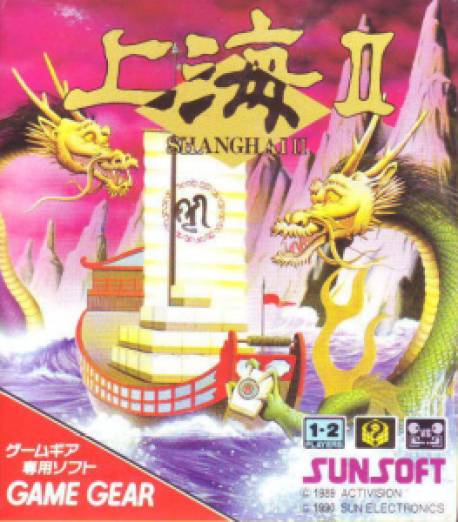 As silly and hyperbolic as it may sound, Shanghai II for the Game Gear is the true answer to Tetris on the Game Boy. Yes, it’s mahjong solitaire, not a groundbreaking puzzle game, but it doesn’t matter. Unlike the overly hyped and deeply flawed Tetris-wannabe Columns, Shanghai II, like Tetris, carries that hard-to-define addictive quality that keeps you coming back for game after game.

“Shanghai” is nothing more than solitaire with mahjong tiles instead of cards. When the game begins, 144 tiles are stacked alongside and on top of each other in a pyramid-like structure. Any two tiles with the same character or symbol on them may be selected and removed, with the caveat that the tiles selected must not have a tile currently on top of them or on either side of them (in Shanghai II, the game will not even allow you to select tiles unless they meet these requirements). Any two flower or dragon tiles will match, as will season tiles (Spring, Summer, etc.). If you run out of possible moves, the game is over.

Shanghai II is a perfect balance of the familiar and the foreign, at least to a Western-born gamer like myself. Unlike mahjong, shanghai is easy to comprehend and play because of its solitaire roots. Shanghai is more visually appealing than traditional solitaire, however, because of the variety of tile characters/symbols and the various tile formations. Also, while shanghai is still mostly luck over skill, there are strategic elements here – like understanding which tiles need to be removed first in order to keep the game progressing – that are missing from regular solitaire.

You’ll be seeing those words a lot.

Options include a one-player Solitaire mode, a timed Tournament mode, and a two-player Challenge mode that requires the Gear-to-Gear cable. In Solitaire mode you can choose from six different tile formations, including Tiger, Dragon, Monkey, etc. Each formation is supposed to look like the animal it’s named after, but the shapes are hard to discern on the Game Gear’s tiny screen. The timed Tournament mode already assumes you’re a Shanghai master who can see five moves ahead; not worth playing unless you’re completely bored with Solitaire mode. In Challenge mode, you try to outscore your opponent, and like Tournament mode, the match is timed.

The Shanghai series was originally produced for a variety of computers back in the 1980s, but it has a confusing history on Sega’s systems as well. The majority of Shanghai titles released for Sega consoles have been Japan-exclusive releases, with the exception being the original Shanghai, which was only released for Master System in the States and Europe. Shanghai II: Dragon’s Eye was released for the U.S. Genesis exclusively in 1994, although its origins stem from Dragon’s Eye Plus: Shanghai III for the Mega Drive in Japan. The Shanghai II discussed in this review is a different game from Shanghai II: Dragon’s Eye. The former released exclusively in Japan for the Game Gear and was still titled Shanghai II, despite the first Shanghai never making it to Japan.

I’d like to think that Shanghai II would have sold gangbusters and moved millions of Game Gear units if it had been brought outside of Japan, but I know that’s not true. With Tetris, you can look at a couple screenshots and get an idea of the game. With Shanghai, you have to explain that it’s solitaire with mahjong tiles, and even then, some people might not get it (I love mahjong tiles, but they don’t exactly scream worldwide appeal). Still, when it comes to games that can suck you dry of your already limited free time, few titles compare to this one on Sega’s handheld. Shanghai II is the Game Gear’s killer app.