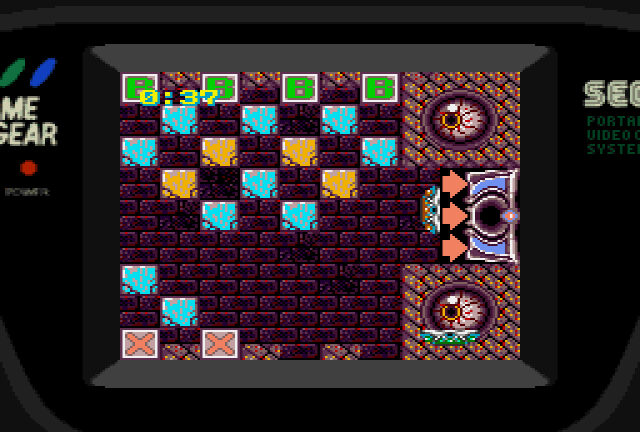 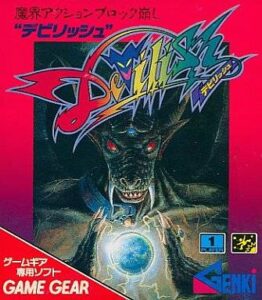 What is it with dragons and crystal balls? 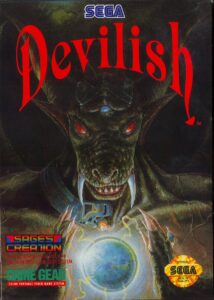 Sometimes I forget how short and simple early handheld games really are. Take the Game Boy and Super Mario Land, for example. The latter can be beaten in 40 minutes or less, depending on how proficient you are at Mario games. Such a short play time for a Mario game would be unacceptable today, but people were fine with this in the late 80s/early 90s because… it was Mario! On the go for the first time! Who cares how long it takes to beat? Super Mario Land is strange and unusual and awesome. Besides, if you’re bored with that, there’s always Tetris.

Poor Game Gear, though. “There’s always Columns” just doesn’t have the same ring to it. And before Sonic the Hedgehog made his storied Game Gear debut in December 1991, the bulky, colorful handheld had to make do with whatever games developers were willing to make for it. This includes true classics like Castle of Illusion and bizarre experiments like Head Buster. There’s also today’s oddity named Devilish, the creative Breakout variant that can be beaten in fifteen minutes or less. Take that, Super Mario Land! 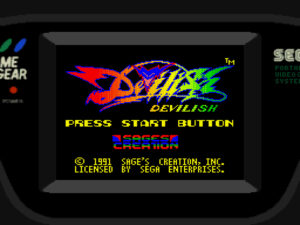 In most Breakout clones, you hit the ball with a paddle against rows of bricks. Sometimes the bricks release fun little power ups that manipulate the paddle or give you multiple balls a la Arkanoid. Sometimes the bricks just disintegrate. Either way, once all the bricks are gone, you move onto the next level and do it all over again.

Devilish destroys all other Breakout wannabes. The game begins in a graveyard stage with a bunch of bricks (presumably old gravestones) and some rubbery zombies at the top of the screen for good measure. Once the bricks and zombos are destroyed, instead of moving to the next stage, the stage follows the trajectory of the ball upwards. You guide the ball with the paddle through narrow corridors, lined with more bricks, enemies, bonus items, and progress-hindering traps. An arrow directs your movements mostly upwards, though occasionally to the left or right, all while a timer counts down around you. Eventually, after much bouncing and paddling, your ball reaches a snug exit hole at the top of the stage, and it’s on to the next bout of insanity. 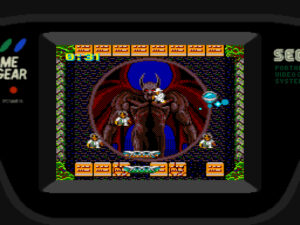 I do mean insanity. The time limit for most of these stages rarely surpasses two minutes, so you will have to haul balls (via paddle) through some absolutely aggressive nonsense. Said nonsense includes: tiny enemies that halt your ball’s movement (including a dancing one named “Michael”), waterfalls that slow you down and shift the ball’s direction, and monster heads that capture the ball in their mouth for three seconds before releasing it. The latter are the worst offenders. Devilish likes to cluster two or three of these heads close together, and you can probably guess what happens next. If you don’t scoop the ball up with the paddle when the mouth spits it out, the ball will careen into another mouth and back and forth it goes until it’s time over. 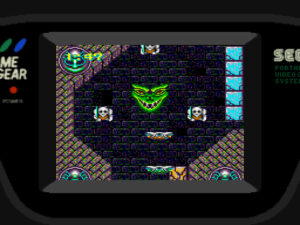 These Green Goblin heads can go to, uh… you know.

Aggressive though the stages may be, if you understand how to guide the ball with the paddle, Devilish is quite easy to bounce your way through. There are four different paddle configurations you can cycle through with Button 2. The default configuration (and the one I used most often) is two horizontal paddles on top of each other. Both move at the same time with the D-pad, but the bottom paddle always stays at the bottom, while the top paddle can maneuver all around the screen. The default is perfect for most situations, especially when you get in a groove and steer the ball through layers of bricks and enemies in mere seconds. Feels so good, my people! 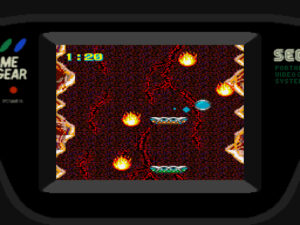 Through the fire and the flame.

Because the time limits are so short, most of the eight stages are designed to be beaten in 90 seconds or less. This extremely limited time includes boss battles in three of the stages. Two of the bosses – a generic looking demon (gotta make good on that Devilish title) and a snake handler – go down easy. Gamma, on the other hand, is the final boss, and he’s the real devil, even though he’s really more of a weird crab creature. If there’s a reason you can’t beat Devilish, Gamma is probably it. His weak point is on the top of his… head? Body? Sure. Half of the time he’s moving around, he’s blocking his weak point because he doesn’t want to die, I guess. What a child! You really gotta up your ball game if you want to take him down. 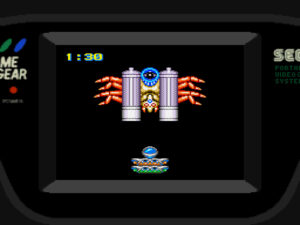 I have never seen anything less devilish than whatever this is.

Devilish is ambitious and unique and… short. Really, really short. There is a Time Trial mode, and a Hard difficulty for those gangster ball-and-paddlers, but that’s all in terms of replay value. Still, good on Genki for expanding the tired Breakout formula into a proper action/adventure, even if it feels more like a demo than a full-on game. Now if only we could do something about the overused satanic imagery, we’d be in real business (SPOILERS: we could not. Devilish: The Next Possession is the Genesis sequel, and I have a feeling it’s got 50% more pentagrams). 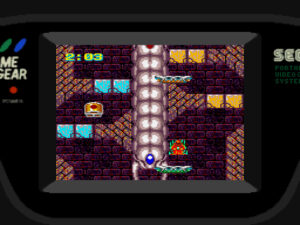 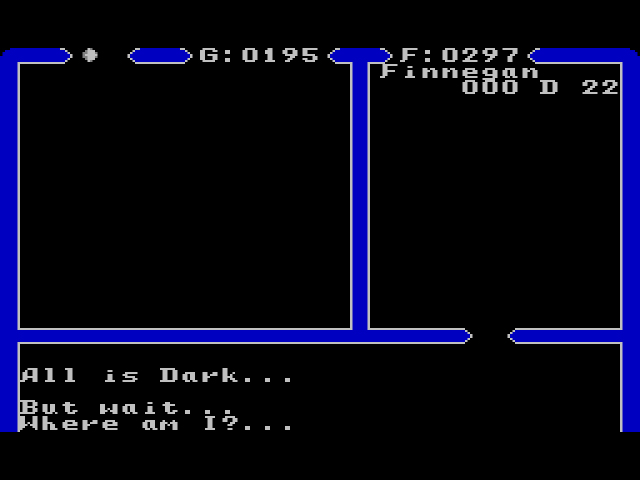 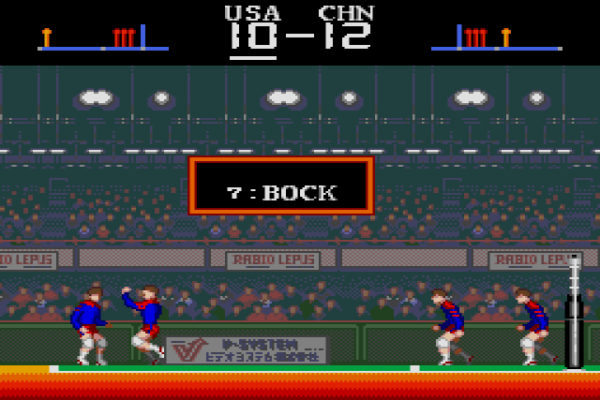 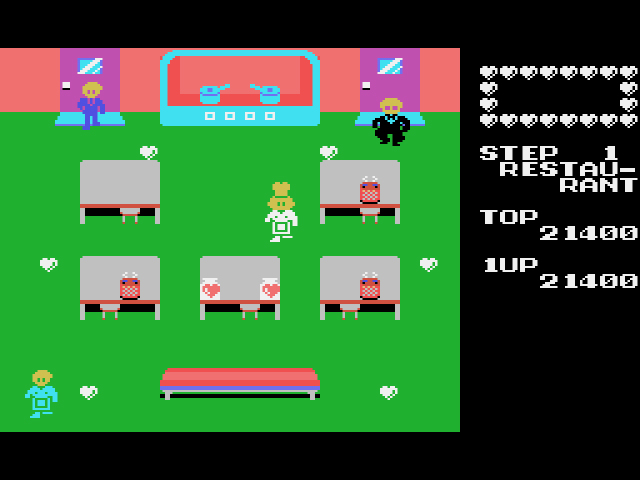 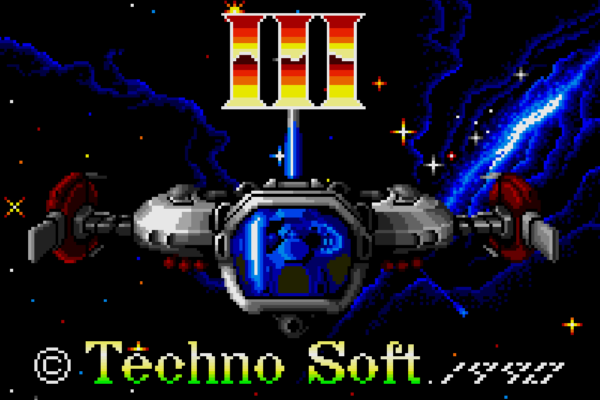