This review is brought to you by the one and only Retro Referee, Peter Skerritt. Be sure to follow him on Twitter @PeteSkerritt.

Quite the explosive ballet.

Will you root for the San Diego Pistons or the Miami Lug Nuts?

Cyberball, in short, is a version of American football that is played by robots on the field instead of humans. This change protects humans from injuries while creating a much more violent product with explosive spheres and robots that can also explode if subjected to a lot of punishment. There are rule changes that separate Cyberball from traditional American football– including the removal of the system of gaining 10 yards for first downs, the removal of punts and field goals, and expanding each game to six periods instead of four quarters—but the game by and large plays and feels like an arcade football game.

In for six points!

SEGA obtained the rights to Cyberball from Atari for the purpose of releasing a home version for its Genesis console in 1990, and it was the first console version of the arcade game to be released. The NES version (courtesy of Jaleco and Tengen) and the Atari Lynx port of Tournament Cyberball 2072 arrived a year after SEGA’s game did. Unlike the NES and Lynx games, however, Tengen had little to do with the Genesis port of the game. SEGA handled the programming of Cyberball, and added a few things to the package that makes it arguably the best overall home version of the arcade game. 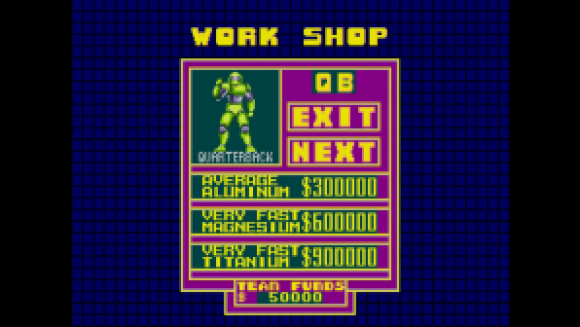 Inflation has really gotten out of hand in the 31st century.

It’s important to understand Cyberball’s rules, especially for players who are accustomed to standard American football. Instead of downs, Cyberball has increasing ball temperature after each play. The ball temperature starts cool when a possession begins, but gradually increases to warm, hot, and critical. If the ball reaches critical temperature, it’s the equivalent of 4th down. Reaching mid-field (the 50-yard line) “defuses” the ball and resets the temperature to cool status. After that, the only way to defuse the ball is to score a touchdown. Players who are tackled with a critical ball in their possession explode on contact, unless they are in the end zone. Players who are tackled a lot can break down, to the point that one more tackle can cause them to explode and fumble the ball. Once a touchdown is scored, extra points can be earned by completing a play with a critical ball into the end zone; one point is earned for completing a pass play, while two points are earned for running the ball in. This extra point conversion is risky, though, because of the potential of losing players to an exploding ball if the conversion fails.

Robot players destroyed in explosions, whether from critical ball situations or due to too many hits, are replaced with low-level plastic ones. Players can be upgraded using money that is earned during play. Scoring touchdowns, completing after-touchdown conversions, crossing midfield to defuse the ball, destroying opposing players, and playing strong defense all add money to a player’s bank. Select players can occasionally be upgraded during play (via an option on the play-calling screen) or they can be upgraded more liberally before a game begins. Be sure to think before upgrading players, though; upgrades are expensive and offensive players are subject to explosion– thus losing any money that was invested. 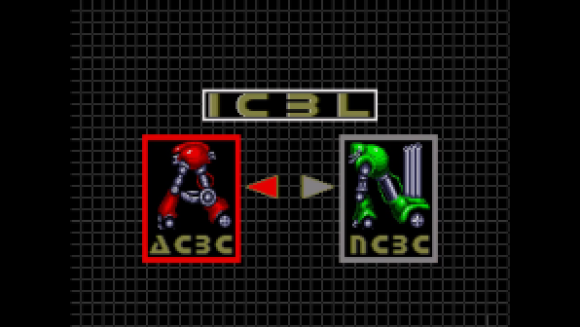 That’s a lot of letters.

Where the Genesis version of Cyberball excels over the coin-op original and over its fellow platform conversions is the addition of a season mode of play. At the start of a season, players select one of 28 teams, spread out over two conferences. Picking a team is as easy as picking a favorite city, since all of the teams are exactly the same at the beginning. Once a team is selected, the season begins and playoff races shape up in each conference’s three divisions. Wins and losses are tracked, but team and player stats are not. Player upgrades are saved, as well as a team’s bank balance. At the end of each game, a twelve-character password is given, which can be used to resume a season should the player want to turn the power off and play something else. It’s not the deepest season mode, but it does provide decent replay value.

Visually, Cyberball for the Genesis does an adequate job of replicating the coin-op. The robot players are slightly less detailed and there are a few other minor differences, but the game still animates well and doesn’t really bog down at any point. The sound suffers a bit more than the visuals do. The lack of bass from the coin-op is noticeable, replaced by a more tinny sound. A few voice samples made the trip, including touchdown calls and successful conversion calls, but quarterbacks no longer call signals and the announcer doesn’t make a call when the ball is defused after crossing midfield. These are relatively minor nitpicks, though, and don’t really affect the how the game plays at all. Aesthetically speaking, Cyberball is about as good as a 16-bit port of an arcade game could be in 1990. 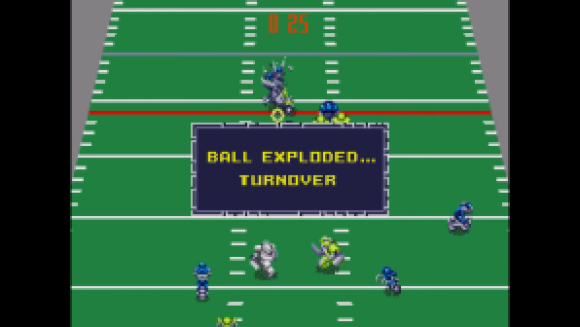 Another quarterback joins the scrap heap. 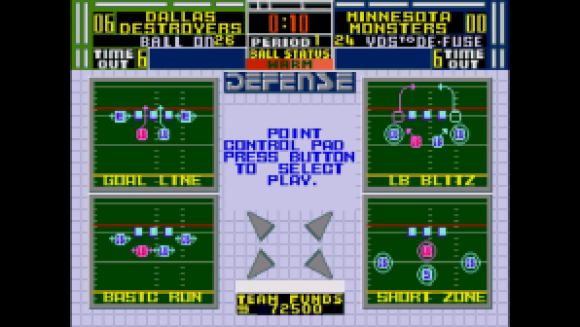 Cyberball is a solid addition to any sports video game fan’s Genesis library. Its arcade roots make the game more accessible than a Madden or Montana football title, but the rule changes here may bother some purists. No punting or field goals, thus forcing offenses to score on every possession, puts pressure on defensive play. You won’t find Deflategate suspensions or unsportsmanlike conduct penalties for excessive celebration here, either. Sure, a battery backup and the ability to track and save team and season stats (a la BaseWars for the NES) would have been nice. But what’s important here is that Cyberball plays pretty darned well and is fun to go back to from time to time. The game’s value has edged higher recently, to as much as $13 for a complete copy, but $5 for a loose cart still provides hours of fun for one player or a pair of competitors.

The first Genesis football game! We’ll sort of. I wasn’t the biggest fan of the arcade game, probrably because it was a quarter muncher and to learn to play it well could take you lots of money. But no such problems for a home port. I didn’t have huge expectations for this game, but man I had so much fun with this.Its a really good and well playing game. The feel of the different robots is great, they all have different ways of movement and momentum, so running with a quarter back is different Thant running with a running back. And the passing game just feels really good. The angles and speed are unique for each robot. It’s something I think no other football game does. For instance you can go faster if you have a conveyor belt but you can’t turn at instant angles and have to accelerate. It brings a lot strategy towards offense and defense and burning guys with the right play.The season mode was fun, but, this game really shined in two player. I had so many epic battles my friends. There really is a lot of depth to the plays on both sides of the ball. And an exploding ball really ratchets up the tension. Even after moving on to stuff life Joe Montana and John Madden football, we still always went back and played this game. I think it’s unique cooncept really helped its longevity. Football games generally get better and you play the most recent one, there is only one cyber ball and I came back to it many times. Anyway, it may be one of the first but it’s still on of my favorite Genesis sports games. Maybe even one of the few still worth playing today.

My initial reaction was “That…does not look like a 16-bit game.” Sounds like it plays really well though.

I thought the same thing. Cyberball looked like trash on the NES too.

It looks much better in motion, and plays really smooth at a high frame rate. But remember this is before the revelation that was John Madden with its pseudo 3D field.

It was a great game on the Genesis though. If you had a Mega Drive from Japan and the gen 1 Genesis, you could use the modem on it to play with a friend over the phone line. The best was that in between quarters or when you’re on the play select screen, it could switch to talk to the other player via the speakerphone on the modem. Shame that they didn’t release the modem in the States… but the US Genesis version when plugged into a MegaDrive should let you use the modem.

Just so you know, I’m still a fan, Petey. It was great meeting you at Retroworld this year! Keep it up, pal, I’m always watching your work.

[…] adopters had three games to choose from at launch. Sega’s own CyberBall (a port of the classic Atari arcade football game), and from Sunsoft, Tel-Tel Mahjong and Tel-Tel […]

[…] adopters had three games to choose from at launch. Sega’s own CyberBall (a port of the classic Atari arcade football game), and from Sunsoft, Tel-Tel Mahjong and Tel-Tel […]