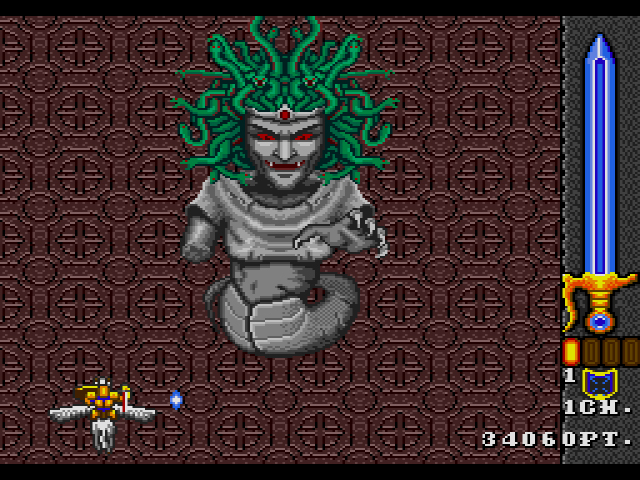 Another gorgeous box, worthy of being framed and hung in your house.

… what’s with the baby blue border?

I see Skeletor, but where’s He-Man?

I’m all for sci-fi shoot-em-ups, but Phelios‘ mythological backdrop is a refreshing change of pace for the genre. Your protagonist is not a space ship, but the Greek god Apollo atop the winged horse Pegasus. Instead of fighting giant space worms, you take on ancient creatures like the Medusa, the Cerberus, and Scylla. Rather than soaring through the darkness of space ad infinitum, you explore temples, caves, and landscapes seared by fire and ice.

Artemis, Apollo’s beloved, has been turned to stone and kidnapped by Typhon, the most terrifying and powerful of all monsters. In order to take down Typhon’s hordes of undead soldiers and demonic minions, Apollo is equipped with a sword that spews both little fire blasts and, when charged, large fireballs. To charge, you hold down any button until the large sword display on the right hand side of the screen is filled with energy. 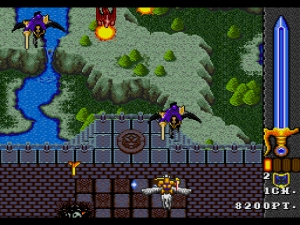 “Don’t make me set fire to the rain, you robed hoodlums!”

Charging your weapon isn’t an uncommon feature within shoot-em-ups, and when used properly, is an effective way to thin out an onslaught of foes. In Phelios, however, your sword takes way too long to charge. Since charged blasts are all but necessary to take down even common enemies, and since the screen often gets filled by said enemies, charging is both your saving grace and a terrible hindrance. 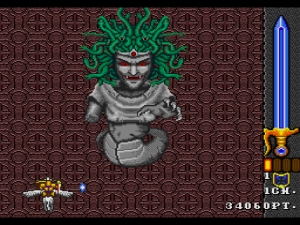 Girl, that hairdo is sooo B.C.

Golden owls emerge throughout each level, and once shot, explode to provide you speed and weapon upgrades. The most common upgrades are Options, diamonds that attach to Pegasus, mirror your sword’s attack, and double or triple your attack power, depending on how many you have. The Beam is a fast-firing, wide-ranging light attack. Homing lives up to its name and takes out the enemy, no matter which direction they come from. Across is a series of boomerang attacks that bounce off walls and ceilings until they hit enemies. In the final level, you collect the letters PHELIOS to acquire the most powerful weapon, a sword of light. These weapons are all fantastic, but they disappear after being in use for a couple minutes, making them little more than a tease.

This descent into the underworld could really use some Mode 7 effects.

Apollo has a small life bar that enables him to be hit up to four times. This might sound generous, given that most shoot-em-ups have one-hit kills, but Phelios is hard as nails. The sprite of Apollo straddling Pegasus is large enough that he’s able to absorb hits without even trying. Certain sections are filled with enemies that are impossible to avoid, and the bosses take too long to kill, even with both Options equipped. Also – and most importantly – Apollo is a god. He deserves something more than a mortal-sized life bar. 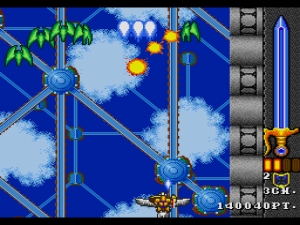 These green bats were the most feared fruit snacks in all Greek mythology.

To be fair, Phelios seems aware of its difficulty. When you first start the game, you’re given the option to play Novice Mode, which is only the first four stages. This mode will help you get accustomed to the game’s quirks, but once the stages are conquered, you won’t be able to see the true ending. And if you’re like me and have played approximately five million shmups across your lifetime, the very notion of a Novice Mode is scoff-worthy. Advanced Mode is all seven stages and is guaranteed to add gray hairs to your chest. If you beat Advanced, another harder difficulty opens up, one that Zeus himself hasn’t been able to beat. 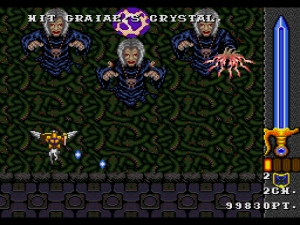 “Double, Double, Toil and Scrumptious,” the new cooking show, only on Lifetime.

Phelios debuted on the arcade two years prior to this Genesis port, but in Japan only. The game’s Wikipedia page claims that this was because Artemis’ bondage/torture cinematics were too strong for American audiences, though they provide no link to back up this claim. The Genesis port does tone down some of the sexual imagery, though, so perhaps there’s some truth to this statement.

Get Joe Lieberman on the horn, pronto!

While I love the idea of a shoot-em-up based around Greek mythology, Phelios is wildly uneven. The shooting is adequate, but the lack of long-lasting power-ups is disappointing. The difficulty borders on cheap, due to the absolutely-necessary-but-painfully-slow charging mechanic and Apollo/Pegasus’ large sprite. The boss designs are wonderful, but the stage layouts are surprisingly barren and lacking in creativity – a shame, given the source material. Namco should be commended for adding a bit of color to a monochromatic genre. I just wish the end result was more fulfilling. 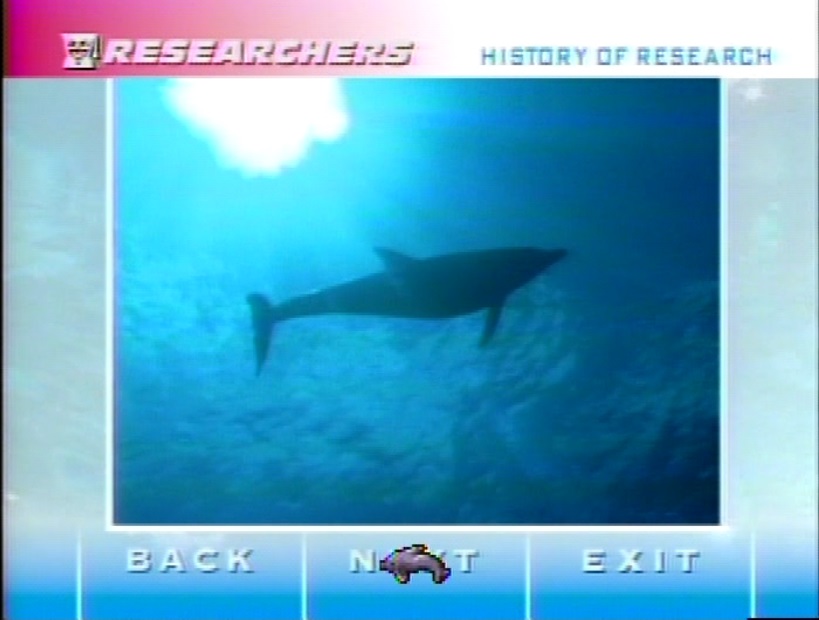 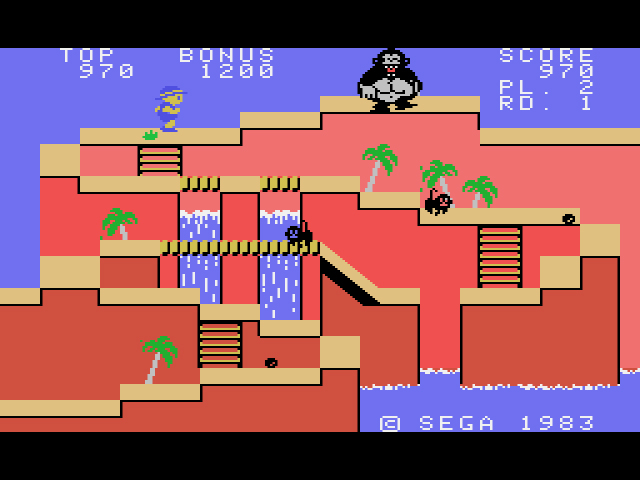 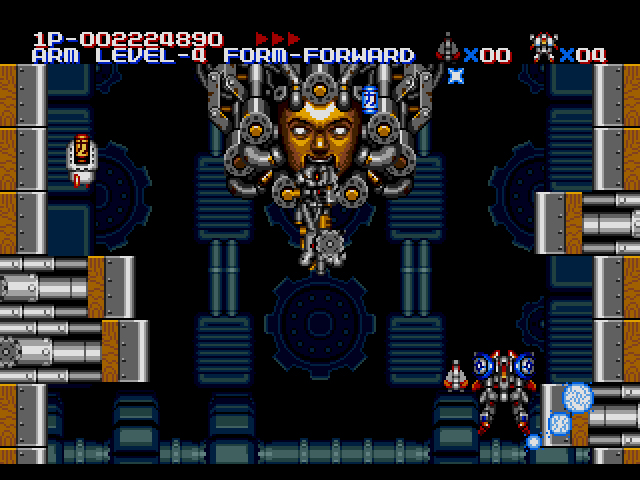 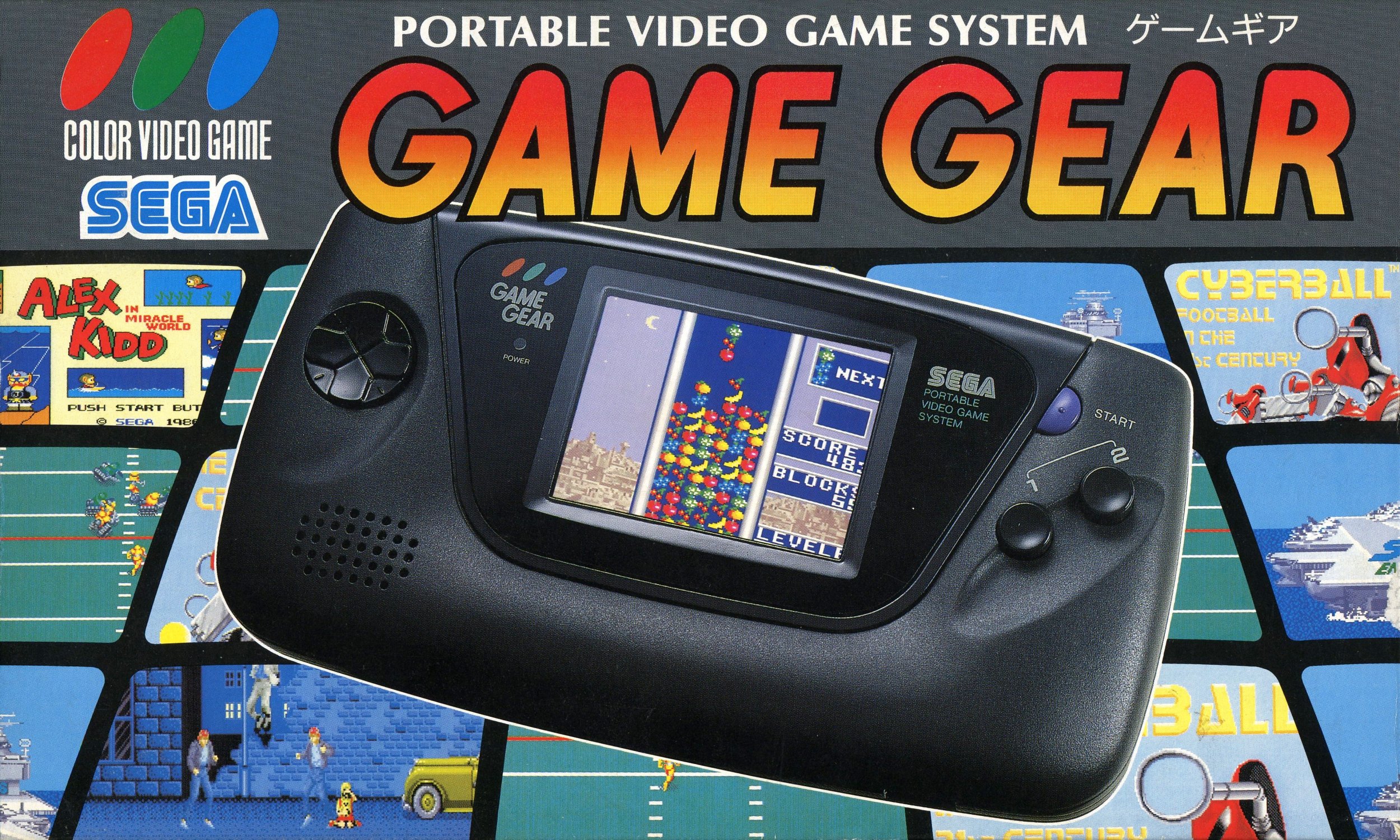