This review comes courtesy of Gary Heneghan, a long-time reader/commenter on the site. Thanks for taking one for the team, Gary! 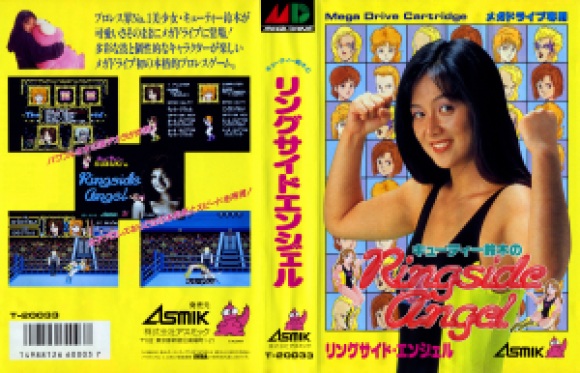 Watch out, Cutie! They’re behind you!

Unless you had a Power Base Converter, a copy of Pro Wrestling for Master System and a lot of patience, there weren’t really any options available to Genesis wrestling fans in 1990. Most gamers might assume the first Genesis wrestling game was a WWF title. Surprisingly, an obscure Japanese wrestling title would beat WWF Super Wrestlemania to the Mega Drive by over two years. 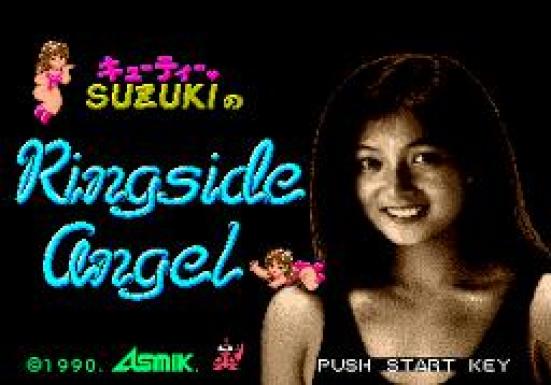 So far, so… not intimidating.

Only released in Japan, Cutie Suzuki no Ringside Angel is an attempt to appeal to fans of ‘Joshi Puroresu’ (women’s wrestling to Westerners) which was very popular in the 80’s and 90’s. Japanese pro wrestling traditionally eschews the showmanship of American wrestling for realistic combat. This applied to the Joshi wrestlers too, who would be critically acclaimed for their hard hitting matches and in-ring athleticism.

The above description of Joshi Puroresu might come as a surprise to you if you’re basing your opinion of this game on the above box art and screenshots. Indeed, first impressions of Ringside Angel aren’t great. The cartoony graphics might hide some slick animation, but they’re unimpressive, even for a 1990 game. The twee music is as functional as the graphics, never impressing nor distracting you from the game. 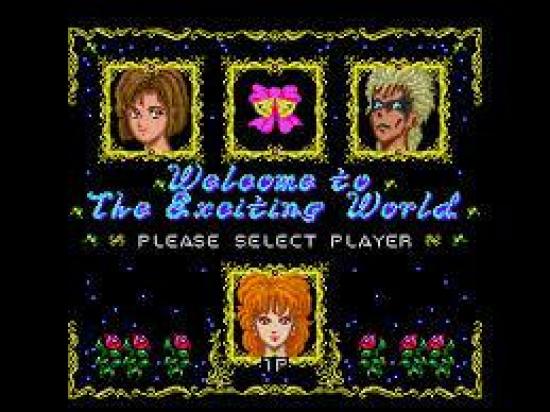 I’ll be the judge of that.

What Ringside Angel does offer is substance. There’s a surprising amount of depth here, from 5 difficulty levels (each with a tournament to win), various commentators (including a dinosaur?!?) rambling in the corner of the screen, a mode to view available moves and the option of a CPU vs CPU battle. The nine wrestlers (Cutie Suzuki and 8 other fictional grapplers, based on real life wrestlers) have a special move, two ground submissions and a selection of suplexes, holds and slams that the player can pick pre- match. Being able to alter your move set is a nice customizable touch and not an aspect seen in many wrestling games at this point. 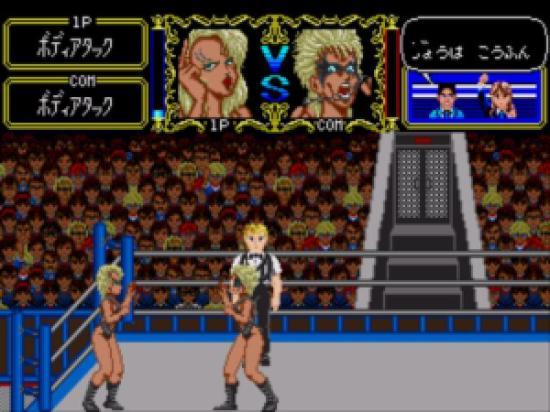 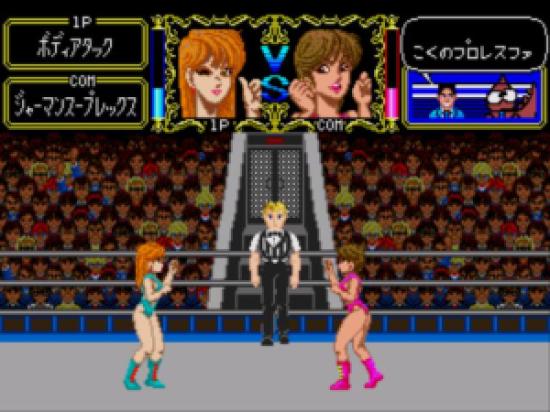 I have no idea how reversals work. Maybe it’s linked to the ‘Fighting Spirit’ style health bar (a picture of the wrestler that gets more upset the more damage they take), but I could only trigger reversals by button mashing. Shame, as the reversals add to the drama. One great reversal in particular, where I escaped a torture rack and managed a backslide pin, had me genuinely surprised at the game’s speed. 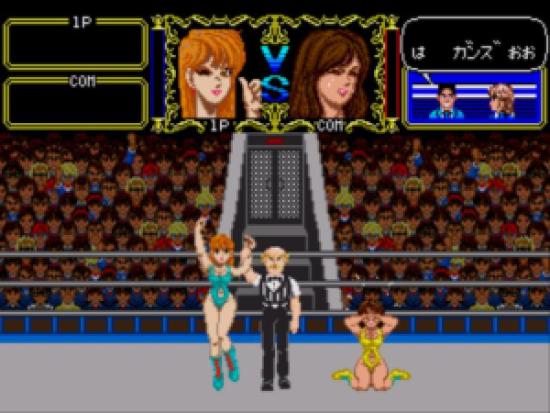 The grappling does get more intuitive as you play the game, but I still wish I understood it better. It’s easier to spam strikes and ground submissions to wear an opponent down, but that misses the point. When I play as Cutie Suzuki, I want to unleash the Cutie Special (a bridging fall away slam), not run away and throw hundreds of kicks. It’s a shame that grappling is such a struggle, as Ringside Angel feels like a labor of love, with considerable thought put into the game mechanics and presentation. 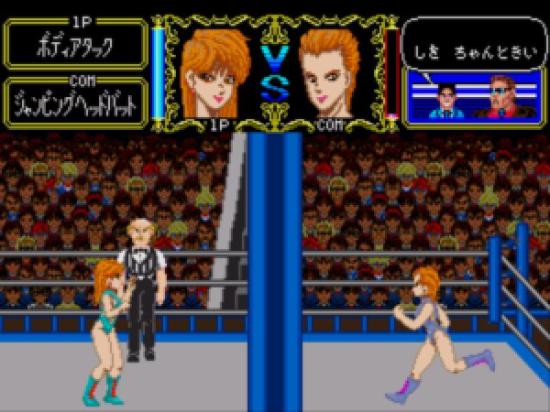 “Think we should tell her about that blue wall?… Nah.”

Overall, Cutie Suzuki no Ringside Angel was a pleasant surprise. Once you get past its simple graphics and adapt to its quirks, there is a surprisingly fun, challenging wrestling game there. Admittedly, it would never have sold outside of Japan. Wrestling games were still niche titles in 1990, and an average looking women’s wrestling game wouldn’t have  changed that. Still, this game is an interesting footnote for Asmik, who would go on to publish Virtual Pro Wrestling 1 and 2, games that would form the basis for the AKI N64 WWF/WCW wrestling classics.

Oh man, so much left on the table here! Made just a bit too late to include the likes of the Jumping Bomb Angels, and just too early to include Manami Toyota…but we do get a dime store version of Bull Nakano and some absolute rock stars of the early nineties joshi pro scene. Really bummed this doesn’t play so hot, because everything else about this is Jeff’s Wheelhouse.

I’m looking forward to hearing a more detailed take on the ‘cast!

I’ve never been able to figure out how to actually play a wrestling game. It seems like no matter which one I pick, and no matter how much punching/kicking/damage I do to the opponent, I always get my butt whupped and pinned. 🙁

I’m with you Taylor. I always get confused over which buttons do what.

I love how often this blog surprises me with worthwhile little obscurities. I’ll have to check this out.

Jeff – All I’ll say is; give Cutie a chance. I wasn’t impressed at first, but Ringside Angel grew on me. Once you get deep into the tournaments, Ringside Angel gets addictive.

Taylor – You need to learn the grappling system for most wrestling games. I admit I couldn’t do it for Ringside Angel – just had to keep punching and kicking!

[…] stepped in to help out with Cutie Suzuki no Ringside Angel. The link is here, if you want to read about a Japanese women’s wrestling game, played by a man with no […]

Love when your just about to become Grand Champion, you begin to lift the trophy and… your last opponent comes running in and drop kicks you to begin the real final bout.
Apart from that really nice touch it’s an average game.

[…] good portion of the non-pornographic Mega LD titles for the LaserActive. Gary Heneghan has tackled Cutie Suzuki no Ringside Angel and will lend his expertise to upcoming soccer and wrestling titles. And Greg Sewart has discussed […]

[…] but Dylan surprised me by offering me a chance to write for Sega Does. The result was a review of Cutie Suzuki’s No Ringside Angel, a review I enjoyed writing greatly. That was when I realised that maybe I could write about video […]

[…] I guess. I’d been a big fan of Dylan Cornelius’ Sega Does blog and had contributed a review of a Japanese wrestling game to the site. I loved writing it, but realized that it was […]